Barrie DoyleOctober 11, 1974
This article is from the October 11 1974 issue. Subscribers can read all of CT's digital archives.

Parents, school officials, and church leaders across America are following with interest a textbook controversy that centers in Charleston, West Virginia. The uproar that erupted there last month may spread elsewhere; the basic classroom and supplemental textbooks involved (mainly literature anthologies) are used widely in schools throughout the nation, and parents from other states have been calling protest leaders to get more information.

The dispute has its roots in decisions last spring by Kanawha County school personnel and the five-member county school board, okaying use of certain textsThe text s are anthology volumes in these series: “Communicating” (published by D. C. Heath); “Man” (McDouglass-Littell); Interaction” (Houghton-Miffiin); and “Man in Literature” and “Galaxy” (Scott Foresman). in the county’s schools. (Charleston, the state capital, is located in Kanawha County.)

Later, after examining what had been approved, school-board member Mrs. Alice Moore—wife of a Church of Christ pastor in St. Albans and mother of four school children—mounted a campaign to rescind the decision and rid the schools of offending books. The books, declared Mrs. Moore, not only contain four-letter language but also teach questionable moral values, undermine religious faith, and subvert family relationships. Through pamphlets and press interviews Mrs. Moore publicized the content of the books, and a 13,000-name protest petition was presented to school officials.

When action was not forthcoming, angry parents launched a school boycott in early ... 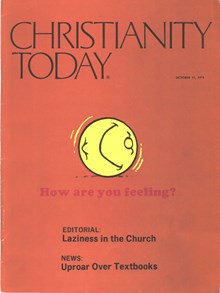