Evangelicals: Out of the Closet but Going Nowhere?

Evangelicals have failed to penetrate the public mood and conscience.
Carl F. H. HenryJanuary 4, 1980
This article is from the January 4 1980 issue. Subscribers can read all of CT's digital archives.

Are evangelical Christians facing an identity crisis at just the time America is experiencing a religious awakening?

On one hand we see the extended impact of the Graham crusades, burgeoning enrollments in evangelical colleges and seminaries, and the cumulative influence of magazines like CHRISTIANITY TODAY. In addition, we see the stimulus provided by the World Congress on Evangelism and the Lausanne Congress on World Evangelization.

But on the other hand, will evangelical indecision and disagreement nullify these spectacular advances?

We can expect prophecies of such a fallout from certain quarters. Humanists and secularists consign biblical faith to cultural obsolescence. Others see its decline as a corollary to a neo-Protestant renewal of ecumenical fortunes.

But prophecies of an approaching evangelical upheaval come also from within the so-called evangelical establishment. The editor emeritus of CHRISTIANITY TODAY, for example, tells us in The Battle for the Bible that a massive revolt against biblical inerrancy is sheltered by evangelical colleges and seminaries, and that many institutions firmly committed at midcentury to a consistent evangelical faith now have theologically divided faculties and accommodate destructive critical views.

The controversy over the Bible will not go away. It seems, rather, to be building toward a day of institutional upheaval. On one hand, the new International Council on Biblical Inerrancy is preparing a massive program of literature on the subject of scriptural inerrancy. On the other hand, stung by innuendos about false evangelicals, a cadre of mediating scholars from various conservative campuses is preparing a major Bible commentary series that combines extensive biblical criticism with ...

Evangelicals: Out of the Closet but Going Nowhere?

Evangelicals: Out of the Closet but Going Nowhere?
expand
hide this 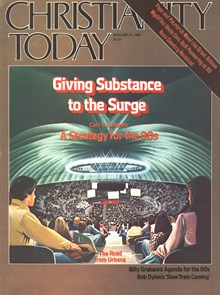 This article is from the January 4, 1980 print issue. Subscribe to continue reading.