The God Who Suffers

If God does not grieve, then can he love at all? An argument for God's emotions.
by Dennis NgienFebruary 3, 1997
This article is from the February 3 1997 issue. Subscribers can read all of CT's digital archives.

Does God ever feel distressed?
The early Christian theologians said no. They accepted the Greek idea of divine impassibility, the notion that God cannot suffer since God stands outside the realm of human pain and sorrow. Philo, the Hellenistic Jewish theologian, had already assumed this in his understanding of Israel's God. Virtually all the early church fathers took it for granted, denying God any emotions because they might interrupt his tranquillity. The Council of Chalcedon (a.d. 451) declared as "vain babblings" the idea that the divine nature could suffer, and it condemned those who believed it.

Like most theologians of Chalcedonian and earlier times, Calvin—and Reformed theology after him—assumed divine impassibility. The Westminster Confession of Faith explicitly asserted that God is "without body, parts, or passions, immutable." Similarly, a contemporary evangelical theologian argues that when Jesus died on the cross it was his human nature that suffered, not the divine.

But I would like to argue that this Greek notion that emotions or pain are unfit for deity is quite alien to biblical thought, and it leads to some unhappy results, as we will see.

Can an unfeeling God love?
A theology that embraces the idea that God cannot suffer has to answer the question: Can God love? Abraham Heschel rightly said that the essence of Hebraic prophetic faith is that God takes the people of his covenantal love so seriously that he suffers for their actions. God "indwells" the Israelites so that he even goes with them into Babylonian exile and feels their sorrowful plight. This capacity to feel for the other in vulnerable love is part of what it means to be God.

The God Who Suffers

The God Who Suffers
expand
hide this 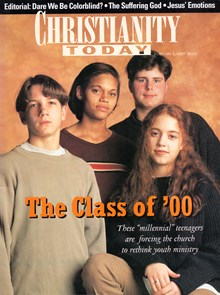 This article is from the February 3, 1997 print issue. Subscribe to continue reading.