Christian Camping: The Right to Rent

Can homosexuals and atheists be barred from church camps?
By Verla WallaceMay 22, 2000
This article is from the May 22 2000 issue. Subscribers can read all of CT's digital archives.

An Illinois church camp is defending their right to deny rental of their facilities to homosexuals while a Kentucky church camp has won a major legislative victory in the two latest skirmishes over civil rights and religious freedom. Two men in Evanston, Illinois, both Methodists, have sued the Chicago Campground Association for $1 million, saying camp trustees refused to let them buy or continue to rent a camp cottage because they are a homosexual couple. Cottage owners Bob and Nanette Graham have filed a separate lawsuit, accusing camp trustees of trying to evict them because they befriended the two plaintiffs, Robert Carroll and Russell Elenz. The homosexual couple has drawn the Northern Illinois Conference of the United Methodist Church into the suit, saying the UMC is the true owner of the Historic Methodist Campground. However, trustees of the 140-year-old Des Plaines, Illinois camp say they own the camp and are fighting to maintain legal control of the property.

By law, camp facilities owned by religious groups and rented to outside groups are considered a public accommodation and subject to anti-discrimination laws. The campground association insists it is not subject to public accommodation laws because it does not rent to the public."The First Amendment should take precedence here," says Steve Laduzinsky, attorney for the camp's Board of Trustees. "This is not a civil-rights case. This is part of an internal church dispute over homosexuality and sexual orientation within the United Methodist Church. There are people trying to broaden the definition of a family to include same-sex marriages. Thousands of years of biblical teaching are being thrown out the window."Kenneth Dobbs, the plaintiffs' ...

Christian Camping: The Right to Rent

Christian Camping: The Right to Rent
expand
hide this 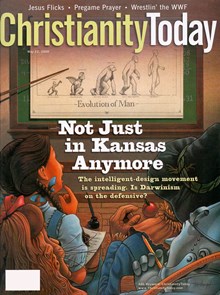