You won't find the word father on the résumé of Steve Zissou.

That's because Zissou, an inventive seafaring documentarian, has been too caught up in his own self-perpetuating mythology to settle down and raise a family. But every dream has its price, and The Life Aquatic with Steve Zissou, director Wes Anderson's latest melancho-medy, is the story of a visionary who must reckon with the temporality, and the cost, of his dreams. The ambitious captain of the Belafonte is clearly past his prime. Cracks are spreading through his reputation as a trustworthy scientist. He's burdened by tragedy. And he's struggling to maintain his few important relationships. Life is proving more difficult to "direct" than the movies he makes with his crew. He'll either sink under the weight of life's disappointments, or be lifted up by an unexpected blessing.

Played with typical devil-may-care detachment by Bill Murray, Zissou is a comical version of the popular 1970s explorer Jacques Cousteau. His films recount the adventures of his faithful crew, "Team Zissou," as they examine new forms of sea life and hold forth about their discoveries, sporting the trademark Zissou style—Speedos and red stocking caps. As a result, they've enjoyed some celebrity … even some merchandising. There was once a line of Zissou adidas.

But Zissou's audience is becoming suspicious that some aspects of his video chronicles are "faked." When his latest installment premieres, documenting the death of his loyal sidekick Esteban (Anderson standby Seymour Cassell) in the jaws of the rare and dangerous Jaguar Shark, they're skeptical. When he vows that his next chapter will be a revenge quest against the bloodthirsty beast, it sounds like the plan of ... 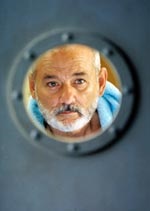