Sixpence None the Richer has decided to call it a day.

In an open letter to fans printed in the March issue of CCM Magazine, lead singer Leigh Nash and guitarist/principal songwriter Matt Slocum made the stunning announcement.

"We write to say that after much soul-searching, we have decided to no longer continue as the band Sixpence None the Richer," they wrote. "After 10 years of music, we are closing up shop and moving on. We have enjoyed being a part of your lives."

Anticipating questions of "what's next," Nash and Slocum wrote, "Well, there's not really a definitive answer to that question. I, Leigh, have become a mother and plan to focus on family life for a while. I, Matt, am taking some time to travel the world and may go back to school."

"Sixpence, both as a band and as individuals, are very special to us," Landis told Christian Music Today in an e-mail. "they've been at the forefront of influencing pop culture and have inspired millions of fans worldwide."

Landis also seemed to leave the door open for a possible Sixpence return when he said, "I can't picture a music environment without some contribution, either individually or collectively, from them. We look forward to seeing what lies down the road for Leigh and Matt as they continue to impact lives and art around them."

Previously, a Landis associate told Christian Music Today that she thought Sixpence was merely "taking a break." But the Nash and Slocum's letter in CCM seemed pretty emphatic—except for their signoff, which read simply, "Goodbye for now." For now?

Sixpence apparently informed the label in January that they were calling it quits. And a Word spokesperson said there ... 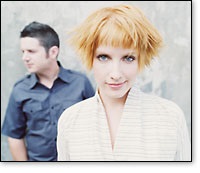