The success of Mel Gibson's The Passion of The Christ has brought renewed attention to the old biblical epics, and if there is any one film that shares Gibson's visual sensibility and his pious but sometimes lurid flair for melodrama, it would have to be Cecil B. DeMille's The King of Kings, new on DVD today as the latest classic release from Criterion Collection. Both films feature a hedonistic banquet populated by laughing revelers and a leopard on a leash. Both films feature a crow perched on a thief's cross. And both films feature fantastic earthquake sequences after Jesus dies—though no one can match DeMille, who seems to think he's making another Moses movie, for sheer over-the-topness.

The King of Kings was first released in the spring of 1927, and it was the middle chapter in a sort of informal biblical trilogy that DeMille produced, beginning with the original, silent version of The Ten Commandments (1923) and ending with the early talkie The Sign of the Cross (1932), which depicts Nero's persecution of the early Christians. Despite being a silent film itself, The King of Kings remained popular well into the sound era, so much so that no other major Hollywood movie about the life of Christ was made for over 30 years, until Nicholas Ray directed the similarly-titled King of Kings in 1961.

DeMille, working from a script by Jeanie Macpherson, rearranges episodes from the Gospels in ways that are startlingly original yet quite effective. The film begins when Jesus (H. B. Warner) has already embarked on his ministry, so it does not depict his birth or his baptism by his cousin John—but it does depict Satan's temptation of him, by setting it in the Temple after Jesus has kicked out the money changers. As the ... 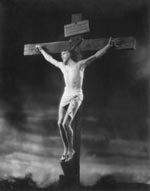