For years, Ernesto "Che" Guevara has been more of a symbol than a man—but a symbol of what, exactly, is hard to say. The Latin American revolutionary, who helped bring Fidel Castro to power in Cuba in 1959 and died at the hands of the Bolivian army in 1967, is still revered for his Marxist politics in some quarters, but for many people, he is little more than the model for that famous image which can now be seen on everything from T-shirts to pop bottles: Framed by a beard and a beret, Che's face seems to stare, romantically but determinedly, into a future where things have been made better. Drained of any specific content, that image has come to represent a generic itch for change, and it has been co-opted by corporations and churches alike to show how hip and macho they can be. 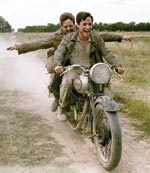 The Motorcycle Diaries aims to subvert all this by showing us the man behind the myth, but in its own way, it too downplays the particulars of the man and his politics. This is partly because the film limits its focus to a life-changing road trip that Ernesto (Gael Garcia Bernal, who previously played Che in the TV mini-series Fidel) and his buddy, Alberto Granada (Rodrigo de la Serna), took across South America in 1952, when they were still university students whose political identities had not yet been fully formed. This is also because director Walter Salles—who scored a crossover hit a few years ago with Central Station, a redemptive road movie about an old woman and an orphaned boy who go deep into the heart of Brazil—tends to emphasize the humanity of the characters through smaller, more intimate moments, while keeping overtly political statements to a minimum.

As a result, The Motorcycle Diaries is a beautiful and even entertaining travelogue of a film that won't ruffle too many feathers. It begins on a somewhat comical note, as Ernesto and Alberto wipe out on their beat-up 1939 Norton en route to the swanky Argentinean estate where Ernesto's girlfriend lives with her family, and Alberto discovers that Ernesto has smuggled a puppy on the bike as a gift for his beloved. (Many more wipeouts are to come.) Alberto is also something of a ladies' man, and always ready to be the life of the party, while Ernesto is somewhat awkward in social situations, and content to stick to the sidelines; when a woman does solicit his attention at a dance in Chile, she happens to be married, and her husband promptly runs Ernesto and his buddy out of town.

Some of their escapades, such as Alberto's success at a gambling table on the night that he decides to hook up with a prostitute, unfold a little too smoothly, a little too much like the sort of thing you'd expect to see in a movie. But at least a few of these episodes do seem to be authentic, such as the one in which a newspaper prints a photo of the two men after Ernesto feeds them a bogus story about their travels; the original newspaper clipping is one of many archival images that appears in the background during the end credits.

That episode aside, The Motorcycle Diaries does indulge in a familiar form of political mythmaking by going out of its way to emphasize Ernesto's honesty. Alberto is a fabulously charming liar who is always making up stories and flattering people—a fact that should, perhaps, be kept in mind, given that this film was based in part on the real Alberto's memoirs as well as Ernesto's—but Ernesto consistently tells people the truth even if it is not what they want to hear, whether he is dealing with a well-to-do German with a tumor on his neck or an associate whose storywriting skills aren't the best. Such scenes are a tad reminiscent of the tales one hears about, say, George Washington and the cherry tree.

The South American landscape provides a stunning backdrop throughout the film

Things turn increasingly serious as the men encounter persecuted Communists, exploited miners and mistreated migrants, whose faces come back to haunt Ernesto as he reflects on his travels. The road trip ends at a leper colony in Peru, where Ernesto and Alberto volunteer their services. The facility, which puts the lepers on one side of the Amazon River and the medical staff on the other, is overseen by Catholic nuns who refuse to serve lunch to those who do not attend mass, and who insist that the medical staff wear gloves, even though there is no need for them. Not surprisingly, Ernesto starts to make waves, both figuratively and literally, first by removing his gloves and touching the patients directly—they respond to this by sneaking food to him when the nuns aren't looking—and then by demonstrating his solidarity with them in a climactic, and highly symbolic, swim.

As the film ends, Ernesto tells Alberto he will have to do some serious thinking, because he has now seen so much injustice. The striking thing is that this film does not explicitly endorse the conclusions to which the future Che Guevera came, which arguably produced even more forms of injustice. And while co-star Bernal has said he finds the character inspiring, he also told a press conference at the Toronto Film Festival that Latin Americans of his generation are more ambivalent about the armed revolutions of so many years ago, which led to a great deal of bloodshed but little actual progress. Instead of presenting us with a political agenda, the film aims, instead, to prick our consciences.

On the road again, with Alberto and Ernesto

If anything, the political injustices to which Ernesto bears witness are dwarfed in this film by what we might call "natural" injustices. As a young medical student, Ernesto comes across sick animals and people crippled by age and afflicted by various diseases; plus, Ernesto himself suffers, sometimes severely, from asthma. "Life is pain," says one of the lepers he treats, and if it seems at times that Ernesto is brushing up against something of cosmic significance—the incredible beauty of the South American landscape when seen from afar, the many small tragedies that one sees up close—then it may be somewhat pathetic, almost a sign of resignation, that he settled for mere politics in his later life.

But that flaw belongs to the man, not the film. At its best, The Motorcycle Diaries is a thought-provoking film, grounded in breathtaking scenery and engaging performances, and if it is more interested in what it means to be human than in pushing any particular ideological agenda, then that is not necessarily a bad thing.

The Motorcycle Diaries is rated R for language; though the dialogue is in Spanish, the expletives show up in English subtitles. There is also some hanky-panky, but nothing explicit. Some characters express skepticism about the Church, at least as it is personified by the nuns at the leper colony; one character links the Church with capitalism by calling it "Jesus Christ Inc."

Peter T. Chattaway (Christianity Today Movies) says Salles "tends to emphasize the humanity of the characters through smaller, more intimate moments, while keeping overtly political statements to a minimum. As a result, The Motorcycle Diaries is a beautiful and even entertaining travelogue of a film … grounded in breathtaking scenery and engaging performances, and if it is more interested in what it means to be human than in pushing any particular ideological agenda, then that is not necessarily a bad thing."

J. Robert Parks (Looking Closer) says, "For those of us who aren't already committed to a particular view of Che Guevara … The Motorcycle Diaries is engrossing and thought-provoking. Even if you don't buy into the film's political angle, you'll still appreciate the strong acting from Bernal and De la Serna. And the focus on just a small part of Che's life avoids the usual trap of bio-pics (the predictable narrative arc) and instead opens up an entire world."

David DiCerto (Catholic News Service) says, "Though the film is beautifully crafted and at times quite moving, some viewers may find it difficult, given the hindsight of history, to reconcile the film's quixotic—almost saintly—portrayal of Guevara with the guerilla warrior of later years who advocated violence as a political tool and, less than a decade after the events depicted, helped establish a communist state in Cuba as Castro's right-hand man."

Brett McCracken (Relevant) argues that the film "is less about preaching single-minded dogma than it is about weighing complex truths. Watching the film I tried to separate myself from the unpleasant picture I had of Che Guevera as a radical leader in Cuba's communist revolution. But, this movie is about who he was; not who he became. It's a story about life, the formation of ideals, and the origins of revolution; not the revolution itself. That is why Diaries didn't offend, but inspired me."

In a year heavy with biopics, mainstream critics are ranking Guevara's story among the year's best.

Josh Hurst (Reveal) says, "At the very beginning and the very end of the film, Che tells us that his story is not about heroic feats. I disagree. Regardless of who and what he ultimately became, the Che Guevara that we see in The Motorcycle Diaries is a model of mercy and servanthood. And I, for one, cannot think of a more heroic pair of traits."

1 of 4
Ernesto (Gael Garcia Bernal) and Alberto (Rodrigo de la Serna) in their travels across the continentErnesto and Chichina (Mia Maestro)The South American landscape provides a stunning backdrop throughout the filmOn the road again, with Alberto and Ernesto