A documentary about Lonnie Frisbee, a key figure in the Jesus Movement and the growth of Calvary Chapel, is making the rounds at film festivals. We talked to the director about Frisbee, who died of AIDS in 1993.
by Peter T. Chattaway |April 19, 2005

Miracles and visions, signs and wonders, scandal and sin. If any of the stories about Lonnie Frisbee are true, he must have been one of the more dynamic and controversial figures to stride upon the evangelical scene in modern times.

Frisbee was still just a teen when he met Chuck Smith, an evangelical preacher who was looking for a way to reach young people in the late '60s. Together they turned Calvary Chapel into a thriving epicentre of the Jesus Movement—that tumultuous moment when counter-cultural youth and Bible-believing baby-boomers came together in a heady mix of dispensationalist theology, social experimentation and evangelistic rock 'n' roll.

Some years later, Frisbee met John Wimber and played a key role in the origins of the Vineyard movement. But his name has largely been written out of the history books. Why? Because he struggled with sin. Specifically, sexual sin. And even more specifically, he struggled with homosexuality, and he died of AIDS in 1993.

David Di Sabatino was researching a book on the Jesus Movement when he came across Frisbee's story and decided to restore him to his rightful place in evangelical history by producing a warts-and-all documentary on the subject. Frisbee: The Life and Death of a Hippie Preacher—rough cuts of which have already been shown at several evangelical churches and schools—premieres at the Newport Beach Film Festival on April 24.

Di Sabatino, who quit his job as editor of Worship Leader magazine to focus on filmmaking, spoke to Christianity Today Movies about his film. 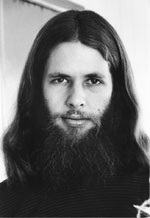