Once upon a time—1796, to be precise—there were two brothers named Grimm. Jacob Grimm (Heath Ledger) believed in magic, but Wilhelm Grimm (Matt Damon) remained a staunch rationalist. In spite of their quarrels, they became partners in crime. Traversing French-occupied German territories, they pretended to save villages from demons, curses, and other disturbances with some sleight-of-hand and hocus-pocus.

But when Delatombe (Jonathan Pryce), a general in Napoleon's conquering army, exposed these tricksters and strung them up to be tortured, it looked like Jacob and Will would meet a fate as unfortunate as their name. But Delatombe had other plans . . . much to their relief. Troubled by news from the town of Marbaden that children were being kidnapped by a wicked witch, Delatombe—a rationalist himself—decided that this too was the work of deceitful crooks. He decided to send small-time frauds to expose big-time frauds.

And so the brothers, monitored by an egomaniacal torturer named Caravaldi (Peter Stormare), set out to escape a "minimum sentence" of death by uncovering their competitors' charade. As they argued over the nature of the forest's sinister secrets, they gained a reluctant guide, a beautiful villager named Angelika (Lena Headey), and became rivals for her affections.

Turn the page. There's another fairy tale here that deserves our attention.

Once upon our time, there was a filmmaking genius—Terry Gilliam—who suffered for years under a terrible curse. (Okay, not really—but let's have some fun with this.) Blessed with a spectacular imagination, Gilliam, Monty Python's only American member, triumphantly delivered two successful studio features: The Fisher King and Twelve Monkeys. But these were exceptions. Gilliam's other films (including Brazil and The Adventures of Baron Munchausen), while spectacular and beloved, barely emerged from troubled productions, leaving the director battle-scarred, beleaguered, and burdened with a reputation as Hollywood's enfant terrible. Investors have repeatedly yanked funding out from under him. Wind, rain, and even the air force are numbered amongst his nemeses. For proof, rent Lost in La Mancha and watch the painful collapse of Gilliam's brilliant plans for an adaptation of Don Quixote.

Wilhelm (Matt Damon) puts his neck on the line

Thus, there's something poetic about the way his films consistently explore tensions between reason and madness, bureaucracy and mystery, institutions and ideas. In the seven years since Quixote's defeat, fans fretted that the system might have broken Gilliam's spirit. But now he's back with two new films (the second, Tideland, will be released in 2006).

So, has his "curse" finally been overcome? Alas, not yet.

The Brothers Grimm is a whimsical caper that takes audiences on a sick and twisted joyride through a wilderness alive with secrets. Unlike Disney, whose innocuous adaptations de-clawed the Grimms' original tales, Gilliam is interested in exploring dark corners of the source material: fables in which wolves have bloody teeth, children stumble into ugly consequences, villagers are as frightening as the curses that plague them, and characters often live unhappily ever after. The premise is perfect for this Quixotic filmmaker.

But you can now count screenwriters among the things that spoil Gilliam's fun. The Brothers Grimm, penned by Ehren Kruger (who also fumbled The Skeleton Key, The Ring Two, Reindeer Games, and Scream 3), feels like a first draft. It's full of clever nods to classic fairy tales. You'll catch glimpses of Red Riding Hood, Rapunzel, Hansel and Gretel, even Jack and the magic beans. But in every scene, outrageous ideas relentlessly compete to make us gasp, laugh, cry, scream, or swoon. They bewilder when they mean to enthrall.

Worse, it feels as though studio execs saw Michael Bay's The Island and decided that Grimm needed to be re-edited into a rapid-fire action flick. The special effects add insult to injury—they're cheap, unfinished, and unconvincing. The result is wildly uneven in tone and lacks the necessary character development to make us care about its heroes.

The bespectacled Ledger and sideburned Damon look like they've arrived at a costume party where a game is already in session, and they can't find anyone to explain the rules to them. As they stagger from scene to scene, Ledger visibly labors to make Jacob complicated and sympathetic. Meanwhile the immensely talented Damon seems stranded for the first time in his career.

They look even worse when they fall into step with Lena Headey's humorless heroine, who's busy skinning a rabbit when we first meet her and never manages to become more romantic than that. Angelika doesn't suffer Grimms gladly, and when they're together, she out-grims them both. (Why didn't the Weinsteins honor Gilliam's desire to cast the great Samantha Morton as Angelika? The studio should have sought the sort of chemistry modeled by Depp, Bloom, and Knightley in Pirates of the Caribbean.) 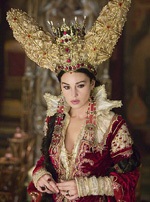 The supporting players don't fare much better. Jonathan Pryce's Delatombe is just an amusing variation of his Baron Munchausen character. As Caravaldi, Peter Stormare's exaggerated antics are hilarious, but they belong in a much zanier film. When Monica Bellucci arrives as the magnificent Mirror Queen, you can understand why men would sell their souls to serve her, but her screen time is painfully short. The final confrontation, which should be riveting, is utterly anticlimactic.

Only a few sequences launch the madcap fireworks we expect from Gilliam's combustible mind. In a bizarre variation on "The Gingerbread Man," a demonic concoction plucks the eyes right out of a terrified child's head and then lurches after villagers like a primordial version of Chucky. In another, a horse infected by a sinister curse suddenly develops an alarming appetite.

If Grimm had come from an amateur director, it might have been praised as a promising start. But we can't help imagining the masterpiece that might have come from Gilliam's collaboration with a better screenwriter—The Fisher King's Richard Lagravense or Shakespeare in Love's Tom Stoppard, perhaps, who both fuse comedy and fantasy with more sophistication. Gilliam would probably agree with C. S. Lewis, who said that a fairy tale "stirs and troubles" us "with the dim sense of something beyond [our] reach and, far from dulling or emptying the actual world, gives it a new dimension of depth." That is, if it's well told.

But Grimm falls short of the fantasy-film standards set by Peter Jackson's Lord of the Rings trilogy, Jim Henson's The Dark Crystal and Labyrinth, Rob Reiner's The Princess Bride, Richard Donner's underrated Ladyhawke, and Gilliam's own masterpieces. Brazil fans are likely to return from this not-so-enchanted forest disillusioned, sustained only by the scattered breadcrumbs of Gilliam's genius, hoping that when they arrive at his next release—Tideland—they'll watch him break "the curse" and live happily ever after.

PG-13 is an appropriate rating, although this film falls on the darker end of the spectrum. Some bloody violence to people and a cat, harsh language, scary monsters, and the abuse of the Lord's name by various characters make this film inappropriate viewing for young children. Teens and adults should proceed with discernment and caution.

It should have been enchanting.

Terry Gilliam, the director of The Adventures of Baron Munchausen and The Fisher King, seems like the perfect filmmaker to take the dark, sinister, twisted tales originally spun by the Brothers Grimm and re-invent them for the big screen. After all, the Disney-fied versions have given shiny, happy makeovers to those classic stories, altering the fact that characters sometimes lived less-than-happily ever after.

Give the man some credit—in The Brothers Grimm, a film written by Ehren Kruger (The Ring Two, Scream 3), Gilliam manages to paint appropriately grim pictures and stir up some spooky situations. Kruger's script focuses not on the real Grimm brothers, but on two half-witted characters by the same name who find themselves stuck in a tapestry of fairy tales. These Grimms are con men who pretend to save villages from curses and monsters. When they stumble into a town that is persecuted by a real wicked witch, they're in for a world of trouble. It's a great premise, bursting with macabre and comical possibilities.

Unfortunately, the result is a mess, clearly the result of studio tampering and poor screenwriting. Even Matt Damon, Heath Ledger, and Monica Belucci can't save this misguided, over-hasty film with its under-developed characters and lousy special effects. While some of the darker details disqualify this as a film for small children, there's just enough cleverness and visual imagination to make it an entertaining matinee for grown-up fantasy fans. But it's hard to ignore how much better Grimm might have been.

Harry Forbes (Catholic News Service) writes, "The overall theme is superstition versus enlightenment, as exemplified by the backward German peasants and the more 'cultivated' French. The film is marred by a slow start and an uneven screenplay. With more fleshing out, the two leads would come off less like stick figures and the plot would be more believable, even within the framework of fantasy. So, too, the abrupt changes in mood from serious to slapstick comedy don't always work. … But Gilliam gets high marks for creating an evocative, 19th-century world … and whipping up a good deal of excitement as the story races to its conclusion."

Even though the original Grimm tales were troubling, some reviewers seem surprised that the film has elements of horror. Marcus Yoars (Plugged In) says the original Grimm brothers "may have written unforgettable, imaginative stories that have mesmerized kids for centuries, but The Brothers Grimm is definitely not for children. More horror than adventure, the movie depicts a scary, spooky world filled with evil spirits, horrifying beasts, enchanted beings and sinister spells."

"Most disturbing to believers," says Eric Rice (Crosswalk), "is that the village people tell a story (with venom) about how a 'Christian king' came into the forest, killed all the trees and built a city." (Well, Christian kings have done worse in history.) Rice also cautions viewers that the film is "violent, gory, scary, dark and misses on a lot of humor beats." And he finds the fact that Matt Damon and Heath Ledger look less-than-handsome "off-putting." (They're felons, running from the law, running out of money, trekking through the wilderness. Shouldn't they look a bit dirty?)

Mainstream critics, many of whom have longed for Gilliam's return after a seven-year absence from the screen, are disappointed.

The editors of World magazine write, "The concept has promise, but, as often happens in Mr. Gilliam's movies, the narrative gets gummed up with his labored surrealism. … The movie … has some interesting visual imagery (including gratuitous bugs), but any one of the old wives the Grimm brothers interviewed was a better storyteller."