Ever since Match Point premiered at the Cannes film festival eight months ago, Woody Allen has been receiving some of his best reviews in years. His new film has been lauded as a change of pace for a director who has long been stuck in his ways, and in some ways it is. It is set in England, not in New York (though earlier films like Love and Death and Everyone Says I Love You also took place, at least in part, outside the United States). It is a mostly serious dramatic feature, not a comedy (though earlier films like Interiors and Another Woman were even more explicit in their emulation of Ingmar Bergman's sobering style). And it dwells just a little more than usual on the actual eroticism of sex, whereas earlier films tended to focus on the social ramifications of adultery, rather than the sexual activity itself (though a few, like Husbands and Wives, were a tad more graphic).

But to this former Woody Allen fan, Match Point comes across as little more than a retread of familiar themes and narrative devices. Worse, the urgency that marked some of his earlier dramas has been replaced by a sort of complacency. There was a time, during the 1980s especially, when Allen seemed to be seriously wrestling with questions about God and the meaning of life. This was most explicit in Hannah and Her Sisters, where Allen played a hypochondriac who experiments with different religions after a series of ominous medical tests forces him to face the fact that he will die some day, and in Crimes and Misdemeanors, where Martin Landau played a Jewish ophthalmologist who gets away with murder, literally, and worries that his success has proved that a just God doesn't really exist, and therefore life has no meaning. Admittedly, Allen's symbolism ... 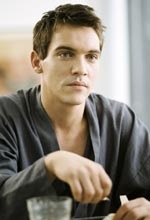