There are only two members of the Rock and Roll Hall of Fame who are ordained ministers—Al Green and Richie Furay. Green pastors a large congregation in Memphis, where his church is a tourist attraction; Furay serves a small out-of-the-way church in Broomfield, Colorado—a humble venue for a humble man. Furay was lead singer of Buffalo Springfield and founder of Poco, two bands that pioneered the sound that came to be called country rock. After a highly publicized conversion to Christianity in 1974, Furay made a few solo albums that remain favorites for fans of "classic CCM"—and then slipped into relative obscurity, devoting his time and talents to his congregation. But now he's back, at the age of 61, with a stellar album of praise songs called I Am Sure

Mark Allan Powell, author of the Encyclopedia of Contemporary Christian Music, recently spent a weekend with Furay, observing him in action—baptizing ten people in Boulder Creek, preaching about Noah's ark on Sunday morning. Afterward, they chatted while seated on the veranda of Furay's home on Sugarloaf Mountain, sipping Santa Fe lemonade.

Tell us about the songs on I Am Sure.

Richie Furay: The style is basic country-rock, or what I would call "Americana"—a little bluegrass in there, some R&B. But lyrically, they're all addressed to the Lord, and a lot of the words come right from Scripture. It's actually a follow-up to a similar collection of songs I did in 1997 called In My Father's House.

Both of those projects have been well received, but they don't really fit the mold of "praise and worship."

Furay: No. They might get classed that way—as worship albums—but I would call them collections of "devotional songs." These aren't just choruses ... 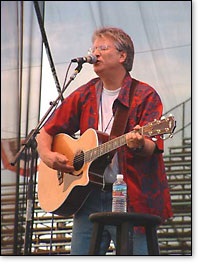