DeMille's film was the last major Hollywood movie about the life of Jesus until the 1960s. Some of the biblical epics of the 1950s may have been set during Christ's lifetime, but they generally avoided showing him directly; in The Robe (1953) and Ben-Hur (1959), he is seen only from behind or from afar, and in Quo Vadis? (1951), he is seen in a brief, static flashback that is also a near-exact replica of Leonardo da Vinci's The Last Supper. By keeping the face of Jesus safely out of sight, or by adhering extremely closely to existing religious art in their depiction of him, these films were careful not to compromise his divinity. 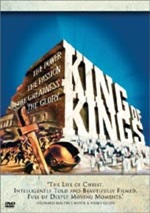 The first major film to dramatize the life of Jesus in the sound era was King of Kings (1961), but director Nicholas Ray handled this material very hesitantly. Jesus himself appears in less than half of the film, which largely concerns itself with scenes of Roman authorities, Jewish rebels, and various supporting characters, such as the Virgin Mary and John the Baptist. When Jesus himself does enter the story, he is often shot from behind: on some occasions, especially when he asserts his divine power and authority, only his shadow is depicted. As in DeMille's film, we are not supposed to sympathize with this objectified Jesus so much as let his gaze scrutinize us and convict us of our sinful imperfection. In a few scenes, such as when Jesus leans over the table to speak to Judas at the Last Supper or when he flicks his eyes up at Herod Antipas after the latter calls him a "faker," the camera does come in close on the faces of certain characters as Jesus looks at them, but the angle is generally too great to be considered a true point-of-view shot; however, the other characters do seem uncomfortable, and the tight framing of their faces suggests that they feel trapped or caught by Jesus's eyes.

The Greatest Story Ever Told (1965), directed by George Stevens, goes a different route, but fits very well within the tradition of projecting Jesus's divinity by filming him objectively. Stevens makes frequent use of wide-angle tableau shots, but when he does use close-ups, he often alternates between virtually head-on shots of Jesus and more angled shots of the people to whom he is speaking. This happens when Jesus meets John the Baptist; when Jesus gathers his disciples; when he speaks to the cripple he is about to heal, to the woman caught in adultery, to Mary and Martha before the resurrection of Lazarus, to the disciples at the Last Supper; and finally when Jesus ascends into heaven. In all of these sequences, Jesus looks virtually straight into the camera, while the camera looks at the other people from a point just off to the side; often when the camera looks at Jesus, his face is alone in the frame, suggesting his unique transcendence, but when the camera looks back at the other people, we see Jesus's back or his head somewhere in the shot. So the film encourages us to identify not with Jesus but with his followers, as they behold him. 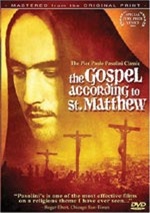 By the time Stevens's film came out, the biblical-epic genre had pretty much come to an end, and its conventions were already being challenged. The Gospel According to St. Matthew, directed by Italian neorealist Pier Paolo Pasolini in 1964 and released in North America in 1966, was revolutionary on a number of levels. Instead of harmonizing the Gospels and introducing other historical or fictitious elements, Pasolini took his script almost entirely from a single Gospel; and instead of the slow, deliberate pace and frequent wide shots favored by earlier filmmakers, Pasolini shot the film in an active, aggressive style, full of movement and close-ups. The actor playing Jesus often sounds angry or raises his voice in an unconventionally aggressive manner that reflects the filmmaker's background in political activism.

Pasolini makes stunning use of point-of-view shots in the film's very first scenes, as Joseph copes with the shock of Mary's pregnancy, but he never really challenges the basically objective portrayal of Jesus that we see in the earlier Hollywood films. The point-of-view shots typically belong to characters other than Jesus, such as the disciples, who walk behind Jesus and strain to hear the teachings that he gives them over his shoulder. Sometimes the camera lurks in the crowd and beholds Jesus from a distance, as when he utters the "Woe to you!" passages; and during the trial before Pilate and his beating by the Romans, the camera's point of view is explicitly identified with that of the disciples Peter and John. Jesus himself remains a more objectified character, rather than someone with whom we are encouraged to identify.

The longest and most ambitious of Jesus films, Franco Zeffirelli's miniseries Jesus of Nazareth (1977), embodies aspects of both the Stevens and Pasolini films. Because it was produced for television, not for the big screen, the film eschews wide landscape shots in favor of regular close-ups, but it also features many head-on shots of Jesus as he gazes at or near the camera. (Zeffirelli has said he hired actor Robert Powell for his eyes: "The eyes, which, more than anything else of the human body, are the portals of the spirit, became in Powell two penetrating beams of light.") And Zeffirelli's Jesus is very much a mystical Jesus. The interactions between most of the characters are frantic, busy, antagonistic, even humorous—but at the heart of it all, Jesus himself remains serene. Rare hints of subjectivity are overwhelmed by their more mystical significance. For example, Jesus tells the parable of the prodigal son after observing, in a point-of-view shot, that a sullen Peter has shown up reluctantly at a party thrown by the despised tax collector, Matthew. Whatever insight this point-of-view shot might give us into Jesus's motives for telling that story at that time is overshadowed by the close-ups on Jesus's face as he reaches the climax of his story and implicitly bids Peter to be reconciled to Matthew. Jesus, looking at the camera, approaches it, and we realize that we are now seeing him from Peter's point of view; the mystical gaze of Jesus has fixed on him, and on us, with the aim of changing his heart and ours. 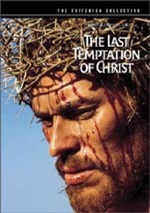 The Last Temptation of Christ (1988) marked the first truly subjective cinematic interpretation of the life of Jesus. Not only does director Martin Scorsese, working from the novel by Nikos Kazantzakis, revise the Gospel narrative in a way that emphasizes Jesus's doubts and uncertainty about his identity, but he also uses voice-overs and point-of-view shots in a way that encourages the viewer to identify with Jesus and that draw the viewer into the mind of Jesus. The film's sexual content, the source of much controversy when it was first released, is made even more shocking because we often see Mary Magdalene and other naked women through Jesus's own eyes; where the Jesus of the Bible said men should not even look lustfully upon a woman, the Jesus of this film chooses to watch as Mary has sex with her clients, and the viewer is obliged to watch along with him. Scorsese has said that he believes in the divinity of Jesus, but his highly subjectivized interpretation of the character makes it difficult to find any sort of mystical transcendence in him.

A similar problem plagues Jesus (1999), directed by Robert Young and produced for television. Although the screenplay is more sensitive to orthodox belief, it too emphasizes the subjective humanity of Jesus, through dream sequences and romantic subplots, rather than his transcendent divinity. The film clearly identifies Jesus as the Son of God, but its overly familiar approach to the character ultimately presents him as more or less just another person grappling with the problem of evil and trying to make the world a better place. 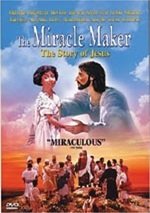 One of the most interesting treatments of subjectivity in a Jesus film is in The Miracle Maker (2000), a British-Russian animated film partly financed by Mel Gibson's Icon Productions. This film cleverly alternates between two kinds of animation: clay puppets, which represent the objective, physical world; and hand-drawn animation, which is used to convey more subjective states of mind, spiritual experiences, and products of the imagination such as parables, stories, memories, flashbacks, even demonic temptations and possessions. In one scene the puppet Mary strokes the hair of Jesus as he sleeps, prompting a hand-drawn flashback to the Nativity; in another, the puppet Jesus enters the Temple and, just before he drives out the moneychangers, he has a hand-drawn flashback to his first visit there when he was an awestruck 12-year-old, suggesting perhaps that his childlike innocence has given way to a more mature criticism.