The cast and filmmakers of Constantine consider the movie's meaning—for audiences, and for themselves.
by Jeffrey Overstreet |February 15, 2005

Angels. Demons. Humans caught in the middle. Heroes trying to resist temptation and defeat Satan's emissaries. Sounds a lot like an adventure yarn from the mind of Frank Peretti. But Francis Lawrence's action-horror flick Constantine, which opens nationwide Friday, is a far cry from This Present Darkness. While the hero is an exorcist casting out demons right and left, he's not exactly driven by humility or selflessness. And he's not too fond of God.

Keanu Reeves (of Matrix fame) plays John Constantine, a chain-smoking exorcist who knows he's going to hell after his lung cancer does him in. He spends his days trying to earn his way into God's graces by investing in his favorite side of the cosmic battle between good and evil. That's the premise. The film chokes on some murky theology and crooked logic, and it delivers more than its fair share of gratuitous violence and gore. (Look for our full review on Friday.)

Christianity Today Movies recently traveled to L.A., where we caught up with Lawrence, Reeves and others involved with the film. We asked questions about the film's portrayal—and their personal ideas of—good, evil, the afterlife, and redemption. Lawrence and Reeves joined screenwriters Kevin Brodbin and Frank Cappello, and supporting actors Rachel Weisz, Djimon Hounsou, Shia LaBeouf, and Gavin Rossdale for a number of questions from religious press journalists.

Interestingly, Reeves was particularly reluctant to address any questions about his thoughts on religion or spirituality. When one reporter inquired about his religious beliefs, Reeves responded, "Please don't. It's something that's very personal, that's very private."

Some highlights from the interviews (note: some of the discussion includes mild ...

Tags:
None
Posted:
February 15, 2005
More From: by Jeffrey Overstreet 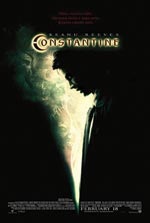