The story is familiar: Stressed-out suburban father sees his co-workers more than he sees his wife and kids, and has the money—and the relationships—to prove it. Enter the visitor, an odd character who displays an endearing simplicity and a contagious love for life. Cultures and personalities clash, leading to the climactic moment when the suburban father finally realizes the weight of his actions. Tears and hugs ensue. The visitor eventually leaves the suburban McMansion and returns home, but the family is changed forever. 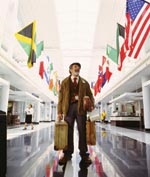 Uncle Nino (Pierrino Mascarino) arrives in America, the land of his dreams

In the case of Uncle Nino, the role of suburban father Robert Micelli is played by Joe Mantegna (Godfather III, Bugsy, Searching for Bobby Fischer, and currently the TV series Joan of Arcadia). The visitor is Robert's Uncle Nino (Pierrino Mascarino), an Italian peasant who journeys to America armed with Italian sausage, wine, a photo of his hero, Abraham Lincoln—and his beloved violin. Picture the Fiddler on the Roof walking into the land of Ferris Bueller, and you can imagine the results.

As with all movies in this genre, it turns out that Nino's visit accomplishes far more than he originally intends. Robert's wife (Anne Archer, Patriot Games, Clear and Present Danger) and children (Trevor Morgan, Jurassic Park III, The Patriot, and Gina Mantegna—Joe's daughter—in her screen debut) long for a relationship with him, but aren't sure what to make of the odd Uncle Nino. But as Nino connects with each of the characters, they also learn to re-connect with each other.

Uncle Nino was originally booked for a two-week test run at a theater in Grand Rapids, Michigan. But after an enthusiastic response by local audiences, the theater extended its engagement for another 10 weeks, outlasting such major releases as The Last Samurai and Mona Lisa Smile. It went on to have a successful year-long run in Grand Rapids.

Now, the film gets its real chance—as well as a real test—when it is released in over 150 theaters across 15 states. (To find out if it's playing near you, click here.) Uncle Nino may have been made for the big screen, but it has the feel of a made-for-TV movie. It remains to be seen whether this feel-good story will find national box-office success, despite a recent media blitz on family-friendly TV networds like ABC Family. It played in Grand Rapids, but will it play in Peoria? 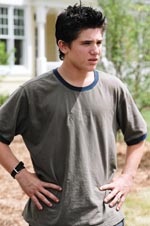 Trevor Morgan plays Bobby, who longs to connect with his dad

If Uncle Nino the character has any influence, Uncle Nino the movie will win viewers over. Mascarino, a veteran character actor with appearances on Seinfeld, The Drew Carey Show and ER to his credit, turns in a beautiful performance as the 70-something uncle. His expressive eyes twinkle with enthusiasm over a good wine, then turn deep and sorrowful when he hears Bob and Bobby arguing.

While Uncle Nino may not understand American culture, he has a far deeper understanding of life and the importance of relationships. In perhaps the best scene of the film, Uncle Nino uses the language of music to connect with Bobby, starting the chain of events that lead to the family's transformation.

Mantegna and Archer are reunited onscreen for the first time in over 10 years, following 1993's Family of Prayers and Body of Evidence. They portray their characters predictably yet not so over-the-top that the audience will roll their eyes.

Anne Archer as Marie, the wife and mom of the Micelli clan

It's clear these actors like working together and wanted to make a nice movie. At times, however, Uncle Nino tries so hard to be a nice, family-friendly film that it ends up coming across as superficial and inauthentic. Bobby Micelli is a typical, rebellious suburban kid, as are his friends—especially his clichéd ringleader-pal, who comes complete with a swagger, spiked hair, cigarettes, and black cutoff T-shirt. And the rebellious teenagers I know would sound like a real R-rated movie, not one that had been overdubbed for network television.

Still, the message in Uncle Nino is timeless. Family matters. Tell people you love them. Despite its predictability, the movie works because it is completely without guile. Taken on its own terms, it provides the simple goodness of a familiar, home-cooked meal. Although possibly better suited as a TV movie than a major motion picture, Uncle Nino nevertheless is an enjoyable film for anyone willing to go along for the ride.

This family-friendly film carries a PG rating, and may be unsuitable for young children. There's no nudity or violence, but there is a teenager smoking cigarettes, and there are several instances of bad and/or mean language.

Photos © Copyright Kick the Can Productions

Uncle Nino won the Crystal Heart and Audience Choice Awards at the Heartland Film Festival in 2003, and is finally making its way to theaters nationwide. It tells the story of Nino (Pierrino Mascarino), an estranged uncle in a family that needs some repairs. When he travels from Italy to Chicago to surprise his nephew Robert (Joe Mantegna), he finds that America holds plenty of surprises for him in return. As he forms bonds with other members of the family, he begins to nudge them toward healthier relationships.

"Uncle Nino is formulaic, predictable, and clichéd—but endearing nonetheless," says Angie Ward (Christianity Today Movies). "At times, however, [it] tries so hard to be a nice, family-friendly film that it ends up coming across as superficial and inauthentic. Still, the message in Uncle Nino is timeless. Family matters. Tell people you love them. Although possibly better suited as a TV movie than a major motion picture, Uncle Nino nevertheless is an enjoyable film for anyone willing to go along for the ride."

Rhonda Handlon (Plugged In) calls it "a film that's paced for Sunday night TV and that fails to get very far under the skin of most of its characters." But she adds, "Uncle Nino's ageless message … shines as a beacon of hope for families everywhere: It's never too late to mend broken relationships, and the most potent healers are love and forgiveness."

Annabelle Robertson (Crosswalk) is not impressed with the performances, but she blames the script rather than the actors. "Their one-dimensional characters have little that is memorable and instead stick with very simply-drawn stereotypes. With its 'after school special' feel, Uncle Nino won't impress movie connoisseurs or those looking for an engaging cinematic experience. It is, nonetheless, a positive family film that offers an excellent opportunity to talk with kids about a range of issues, from smoking to estranged family members to the importance of spending time together."

The film is faring poorly with mainstream critics, who describe it as "a creaky, clichéd, feel-good family drama."

1 of 4
Uncle Nino (Pierrino Mascarino) arrives in America, the land of his dreamsJoe Mantegna plays Robert, an overworked guy who needs to spend more time at homeTrevor Morgan plays Bobby, who longs to connect with his dadAnne Archer as Marie, the wife and mom of the Micelli clan