One of my favorite moments in the first Harry Potter book—and it wasn't in the film—concerns a bit of casual, low-key bullying and camaraderie among the young wizards. Poor, hapless Neville Longbottom hops into a room because Draco Malfoy has magically bound his legs together, and Hermione Granger, the brainy know-it-all, immediately seizes the opportunity to show that she can undo the curse and set Neville's legs free. I grinned when I read that, because it seemed exactly like how children with those powers would behave.

Replace the magic with superpowers, and you've got the essence of Sky High—a movie about a high school for superheroes, where the guy who can stretch his arms is more likely to reach across the room and trip you than to lend you a helping hand. We've seen superheroes go to school before, in the X-Men movies, but those films were more about the grown-up battles, and they got a little grim, besides. Sky High is more adolescent, in the best, age-appropriate sense of the word; it's like a John Hughes movie, but for tweens. It's got a boy who falls in love with the most popular girl at school, even though we all know he ought to be with the girl next door who is also his best friend; it's also got loads of '80s music or covers thereof, including hits by the likes of The Cars, 'Til Tuesday and Tears for Fears. But it is also free of the sex and profanity that mar many movies for teens.

The boy is Will Stronghold (Michael Angarano), the son of two superheroes who are known to the world as The Commander (Kurt Russell) and Jetstream (Kelly Preston), and who moonlight as real-estate agents to keep their identities secret. For them, saving the world is all in a day's work, but what really gives them a thrill is the thought of closing a sale and celebrating on a beach in Hawaii with no exploding volcanoes in the vicinity. And like all superhero parents, they have great expectations for their son—expectations that Will fears he may never meet, since it's the first day of high school and he still hasn't discovered his powers yet. (In one of many amusingly oblivious proud-papa moments, The Commander throws a weight to his son like it was a Frisbee, and Will falls back on his bed, which collapses.)

Kelly Preston as Jetstream and Kurt Russell as The Commander

Every school has its cliques, and at Sky High—so named because it is stationed on an anti-gravity platform up above the clouds, to keep it safe from evildoers—these social divisions have been formally recognized as part of the school curriculum. Those with impressive powers are sent to "hero" classes, while those whose powers are not so impressive are sent to "sidekick" classes—or, to use the more politically correct term, "hero support." Due to his lack of powers, Will is designated a "sidekick," and he finds this so shameful that he debates whether to tell his parents. Will's best friend Layla (Danielle Panabaker), who can make plants grow at will, encourages him to be honest with them; what's more, she openly identifies with the "sidekicks" as a way to protest the social barriers at school. 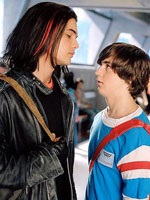 Will (right) gets bullied by a jock played by Steven Strait

Meanwhile, Will has to deal with the bullies. A few taunt him simply because he's easy prey. And then there is Warren Peace (Steven Strait), the sullen, dark-haired, scowling guy who can throw fireballs from his fists; his father is a supervillain who was put behind bars by The Commander—so he has a special reason for wanting to pick on Will. Meanwhile, as Will finds his way through these new social dynamics, he also falls head over heels for Gwen Grayson (Mary Elizabeth Winstead), one of the most popular girls in school, and a "technopath" who can manipulate machinery with her mind. (When Will brings her home from a date, her father glares and asks, "You're not that boy with the six arms, are you?")

Lurking behind all these school-set shenanigans, of course, is a supervillain with a nefarious plan to wreak revenge against Will's parents. This is perhaps the weakest part of the film. The fact that it is somewhat predictable isn't a problem; part of the whole point of a hybrid film like this, which is part teen movie and part superhero movie, is to see how the clichés of one genre can give new dimension to the clichés of another genre. It just isn't very convincing, interesting, appealing, or funny; and the humor at the expense of villains who tend to "monologue" was handled much more wittily in The Incredibles.

Lynda Carter, who once played Wonder Woman, makes an appearance

Still, it gets the story from Point A to Point B, and there are plenty of humorous asides and in-jokes along the way. Grown-ups with especially long memories will get a kick from the scene in which The Commander opens a yearbook to his own high-school photo; it may bring back memories of the of the Dexter Riley movies that Russell made for Disney over 30 years ago, in which he played a college student who was accidentally endowed with invisibility, super-intelligence, and super-strength. Elsewhere, Lynda Carter (TV's Wonder Woman) plays the school principal, while Bruce Campbell (a regular of Sam Raimi's films, he had cameos in both of the Spider-Man movies) plays the overbearing gym coach. And in the course of explaining to Will why he might be a late bloomer, the school nurse (Cloris Leachman) with the X-Ray vision makes a hilarious remark about radioactive accidents—the source of so many heroes' powers—that sets up an even funnier scene later on.

And perhaps most importantly of all, the film sends out a few good messages along the way. People learn from their mistakes. People learn to be honest with one another. Neither friends nor enemies should be taken for granted. And it will come as no surprise that the "sidekicks"—the nerds, geeks, and other outcasts whose powers were not considered impressive enough—turn out to have just what it takes to save the day in the end. Plus, I especially like the way the film subtly mocks the pompous tone of The Commander's pronouncements without undermining their content. To one instructor, he says, "Whatever you're teaching them, keep teaching them—it." He is dimly aware that he could have phrased that better. But he knows, and we know, that it's the thought that counts.

Sky High is rated PG for action violence and some mild language. It's quite family-friendly.

What if the X-Men went to a school that was kind of like Hogwarts, only American instead of British? And what if the school was stationed up in the air, kind of like that hangar where Angelina Jolie was stationed in Sky Captain and the World of Tomorrow? You might get something like Sky High, a fun Disney flick about a high school for superheroes that seems to have left most Christian critics reasonably happy.

David DiCerto (Catholic News Service) writes, "Director Mike Mitchell strikes the perfect blend of campy humor, visual finesse and honest emotion. The movie has a goofy comic-book charm that doesn't take itself too seriously. Yet though lighthearted in tone the film explores coming-of-age themes of self-esteem, peer pressure and parental expectations, and is suitable for all but the youngest viewers. Like The Incredibles, at its heart Sky High is about family and those everyday superpowers we all possess: love and friendship."

Christopher Lyon (Plugged In) says the film has "some super messages" for tweens: "For one, Will has two strong (really strong), committed parents who are married and genuinely like each other—unusual for kids in most Disney flicks. They're not perfect. Dad's expectations put lots of pressure on Will, and Will gives into some normal teen temptations including lying, disobedience and reluctantly hosting a party while the 'rents are away. But all his wrong choices have clear, negative consequences. And Mom and Dad are Will's first stop when looking for support and guidance." Lyon goes on to call it "a generally kid-friendly, low stress, sometimes funny little adventure that's easy to watch and easy to forget. In a summer crowded with dark, brooding and complex celluloid superheroes, though, Sky High's light tone, bright colors, chuckles and easy lessons may provide a welcome relief to families looking to satiate their youngsters' hero-hunger."

Kenneth R. Morefield (Christian Answers) compares the film to other depictions of high school life: "After ten years of Beverly Hills 90210, it is refreshing to see a high school depicted with actors who look like they could actually be in high school and characters who still feel awkward over that first kiss and whether or not mom and dad will give them a scornful look. I have no doubt that teens like those depicted in Mean Girls and Thirteen exist, but I also have no doubt that there are still a few places on the globe where harassment from the school bully is a bigger fear than not being able to score your next fix."

Steven D. Greydanus (Decent Films) says, "Less than a month after Fox's dumb, trashy Fantastic Four somehow passed itself off as a family-friendly superhero comedy comes Disney's Sky High, a film that actually fits the bill." Compared to Spy Kids and The Incredibles, he says the film "comes off underachieving and derivative. Yet in fusing its familiar super-powered trappings and squeaky-clean PG milieu to the venerable clichés of the John Hughes-style high-school coming of age films today's parents grew up with, Sky High manages to be at once completely familiar and at the same time a little different from any film you've ever seen before … It's hardly inspired, but it's competent, wholly inoffensive, and consistently mildly entertaining."

Denny Wayman and Hal Conklin (Cinema in Focus) write, "Sky High is a comic tale in the old tradition with a moral that not only children can appreciate but adults can as well."

1 of 4
Kurt Russell is the superhero dad, Michael Angarano the not-yet-super sonKelly Preston as Jetstream and Kurt Russell as The CommanderWill (right) gets bullied by a jock played by Steven StraitLynda Carter, who once played Wonder Woman, makes an appearance