Veteran singer/songwriter Glenn Kaiser, he of Resurrection Band fame, has been focused on playing and singing blues music in recent years. A Christian, singing the blues? You bet, says Kaiser. Here's why.
Mark Moring|June 13, 2005

Glenn Kaiser is one of the friendliest folks you could ever meet. Forget the weathered, leathered, tough-guy biker look. The Christian music veteran loves a good conversation, has an easy laugh, a twinkle in his eye, and generally makes a listener feel appreciated. So why's such a nice guy singing the blues? Because he's also brutally honest. And honestly, life sometimes stinks. Sin is rampant. Evil is everywhere. The blues are alive and well—whether we sing about it or not. The Bible is full of the blues; it's even got a book called Lamentations. Kaiser notes that 57 of the 150 Psalms are songs of lament; he even calls David the "original bluesman." And the 50-something Kaiser has lived the blues. He grew up in poverty. His parents divorced when he was a teen, shattering his life. He became the stereotypical drug-abusing rocker who once attempted suicide. But then he found Jesus and turned his life around. He joined Jesus People USA, where he became a leader and an ordained pastor in the inner-city ministry which focuses on reaching the poor, the down-and-out. Along the way, he founded the popular (and now defunct) rock group Resurrection Band, did a number of side and solo projects, and, more recently, formed the three-piece Glenn Kaiser Band, which specializes in playing the blues. A Christian singing the blues? Kaiser says it makes perfect sense. We sat down with the veteran singer/songwriter/guitarist after a recent gig to get the story. 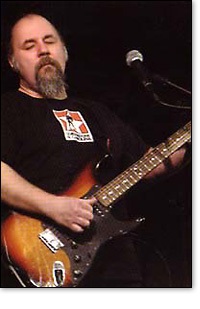 Do you think of Glenn Kaiser Band as an extension of Resurrection Band, or something totally new?

Glenn Kaiser It's a natural progression, and in some ways it's come full circle. Before I became a Christian, I was doing three-piece groups—blues rock, very similar to what you're hearing now. In fact, "Grinder," the instrumental tune that we did on Carolina Moon, I wrote that in about '68 or '69, before I became a Christian. So it's come full circle.

Why have you decided to focus on the blues?

Kaiser There are many reasons. For me as a preacher, blues is perfect because lyrically you're communicating stories and concepts you want to put across in a real-world, earthy, feet-on-the-ground way. That's who I am. That's who a lot of the people are that show up at our concerts—people who are tired of plastic wrap on the couches, tired of sterility, of dilution. They don't always trust people. The blues isn't for everybody, but a lot of people just want to hear it straight—and we're pretty in your face lyrically.

And the music is, again, a throwback to my youth when I sang and played in blues and R&B bands. And I grew up listening to it.

Before you became a Christian, you had come from a broken home, had some wild times and even a suicide attempt. You lived the blues. Do those hard times inform your writing today?

Kaiser No question. We were on welfare. If it weren't for USDA peanut butter and nickel loaves of bread, we would have starved. My dad went through a series of operations, and while he was in the hospital, my mother ended up committing adultery. Things went from bad to worse, and the family blew apart.

We were so poor. I'm talking central Wisconsin in the winter. It's the stuff of blues legend, but it's the truth. We had a little potbellied stove in the front room, and when the coal ran out, we were freezing. We put bales of hay around the foundation of the house to try to keep a little warmer, but I was always cold. Many days, breakfast was a couple of pieces of day-old white bread, sometimes fried in grease. That was it.

So a lot of that stuff invariably formed how I think, how I feel.

Would you say blues is more lyrically defined than musically or stylistically?

Kaiser Fifty-fifty, I'd say. Maybe sixty-forty, with music taking the sixty percentage. But lyrically, when I hear the old field hollers of slaves, people might call it "spirituals." But the blues is at the core. Had that music not happened, what we now call blues would never have happened. It's all lyrics of lament.

Of the 150 Psalms, 57 are psalms of lament. That's the biggest category of lyrics in the Bible: Lament. That's struggle, that's sin, that's temptation. That's, "I have enemies coming after me; God, where are you?" And the endings are not always happy. Life is laced with sin. There's a real devil and real demons. This is all reality. To me, if you were going to choose a music style, it wouldn't be major chords all day long. Sooner or later, you're going to land in the blues. Because it's honest.

Maybe we need more of those raw, honest lyrics in Christian music.

Kaiser One of the things that is suspect for much Christian hymnody, much less CCM pop, is there is no lament—very little of the spilling of one's guts that you hear in secular blues music. To me, that's suspect.

So little of today's music is confessional. But when life is crappy, or we're struggling with sin, the blues say come right and say it.

Kaiser Let's be straight here. Who has not been the prodigal son or daughter? Now, are we going to talk major or minor chords to do a song about the guy in there with the pigs, in a famine, away from his family, hurting, miserable? Again and again as Christians, we blow it. We sin. We don't always choose God. And that brings us to an element of lament, where in repentance the sinner—even the saved sinner—is crying out to God over his sin: You were in the north, God, and I went south. The prodigal has to come up with some blues and minor chords. It's not all happy clappy stuff. I have hope when I begin to realize that I'm hopeless without Jesus Christ. You can't have one without the other.

You mentioned the Psalms. I hear you think of David as the "original bluesman."

Kaiser Yes, it's on my website. Somebody asked me in an interview, "Who's your favorite musician?" I said, "David." He goes, "No, who's your favorite blues musician?" I said, "David. Book of Psalms, man." Look at David's life. He writes about Nathan the prophet confronting him about being a murderer. And you want to talk about a lust problem? Here's a guy with a harem full of woman, sees one more, and sets up her husband to die so that he can have Bathsheba. And here, Nathan the prophet gets in his face. And David repents, God bless him. He humbles himself and repents and writes a song about it. And that's in the hymnbook of Israel. When they're singing and worshiping, when the Levites and the people are worshiping before a holy God, they are singing those lyrics about those events.

Come on. You want to talk about worship revival and depth in the Christian church and the worship movement? Give me a break. Hey, I haven't come to that level of humility and confessional lyricism and songwriting yet, but I'm on my way. But there just aren't that many people who are really breaking down and writing those sorts of lyrics. And we're not going to sing many of those sorts of songs in church because, Hey man, I came here to have fun and to feel good about myself. You know?

Kaiser Agreed. The whole life is worship. I'm afraid we've almost divorced worship from loving our neighbor as our self. The first and most important commandment is "You shall love the Lord your God with all your heart, mind, soul and strength." And we go, Oh, stop right there. That's worship. Yeah, but keep reading. Jesus isn't finished yet. And the second most important commandment is this: "You shall love your neighbor as yourself." And I think I read somewhere that we should weep with those who weep. But I think most of the Christian church is focused on rejoicing with those who rejoice.

It's hard work. It can be depressing if your focus is constantly on the pain and the suffering and the sin and the poor and the homeless and the marginalized, the racism that goes down in this world and even in the churches. I'm not a macabre person. But the bottom line is that worship of God cannot be disconnected with loving your neighbor as yourself. Yet for the last eight or ten years, when Christians are talking about worship, we're really talking about the songs. That's so one-dimensional.

Worship really is lifestyle, and it includes suffering alongside of my neighbor. Worship includes not just bringing my offering to the temple, but for the one who has two coats, to give one to him who has none. And I think that there is a divorce among many Christians when it comes to loving their neighbor, particularly their poor or their marginalized or their not-so-groovy-never-drive-a-Lexus neighbor. That kind of attitude. These folks think they're worshiping God? Because they're singing "the top ten" worship hits on Sunday morning? Excuse me. I'm hearing the prophet Amos hollering in my head.

Tell me about a song you've written that was about a specific hard time in your life.

Kaiser Boy, there are so many.

Yeah, but pick one.

Kaiser "In the soul of a man, there ain't much room to hide / Until he reads his conscience he cannot rest inside" (from "In the Soul of a Man," on Winter Sun). That song has been applicable to many situations. There are so many occasions when I'm really tempted, or when I'm jumping the fence with my thoughts or my mouth, saying things I shouldn't, or just a bad attitude or being grouchy. There are not a lot of songs for me that come out of a specific occasion, because there have been many occasions. I've had so many experiences, and I have so often been a jerk.

How long do you think you'll be singing the blues? Till the day you die?

Kaiser As long as I live, yeah. Sure.

Here's a weird question. Would it be appropriate to play the blues at your funeral?

Why? Once you pass into glory, aren't all the blues behind you?

Kaiser All the blues are behind me, but they're not behind the people that are there at the funeral. They're still living in a world that's full of the blues.