For 20 years, We haven't heard any new music from Steve Taylor in a decade, but the guy has been plenty busy—running a studio, writing, producing, and now working on a feature film.
Russ Breimeier|March 28, 2005

In 1983, the fledgling Contemporary Christian Music scene was dominated largely by inspirational pop and behind-the-times rock bands. Amy Grant was still a rising star and virtually no one had heard of Michael W. Smith. Suddenly, a young twenty-something emerged with his debut EP, I Want to Be a Clone, armed with a relevant new wave rock sound and lyrical wit that challenged Christians to consider their faith and actions.

That artist was Steve Taylor, who went on to become one of the most important Christian artists in the next two decades—half that time in a solo career, including an all-too-brief stint with the mainstream band Chagall Guevara. Since then, Taylor has made an impact as a producer, record label executive, and music video director. But it's been ten years since his last album, and his Squint record label—once home for Sixpence None the Richer, Burlap to Cashmere, and Chevelle—folded. We wanted to know what he's been up to, so we caught up with Taylor in Nashville, where we looked back on his contributions to Christian music and ahead to his first feature film, starring another Christian music legend.

What Christian music trends have impressed you most in the last 20 years?

Steve Taylor I read an article about a year ago that interviewed some A&R people at major [secular] labels. They were talking about how they were seeking out Christian rock bands to sign because they tended to be the better bands. Apparently it's due to the circuit we've developed through churches, coffeehouses, and things like that, where rock bands have grown up in a performance environment and are better for it.

The idea that major labels are specifically seeking out Christian bands because of superior talent is really a ... 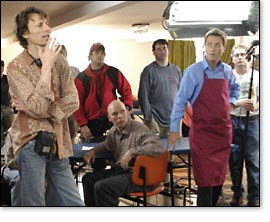