Douglas Gresham has dreamed of seeing Aslan on the big screen since he was a little boy. Now that his dream is about to become reality, C. S. Lewis's stepson talks about the new movie, and his role in it. (Part 2)
by Mark Moring |November 1, 2005

Since he first read The Lion, The Witch and The Wardrobe as a young boy, Douglas Gresham has dreamed of someday seeing it on the big screen. His dream will come true on December 9, when the film adaptation hits theaters worldwide.

Gresham, stepson to LWW author C. S. Lewis, was a co-producer of the film, representing his stepfather and the Lewis estate throughout the process—the writing of the script, the making of the movie, and even the merchandising of the spinoff products, including the toys for McDonald's Happy Meals.

We recently had an hour-long interview with Gresham, where he discussed his life with Lewis and the upcoming movie. Yesterday's part one of the interview focused on the former; today's part two focuses on the latter. We talked about his role as co-producer, the religious imagery in the film, how he thinks Christians—or anyone, for that matter—should watch it, and what Lewis might think about his book being turned into a Hollywood movie … or, for that matter, his characters being turned into fast-food toys.

What were your duties as co-producer on this film? I read somewhere that you said your duty was basically to represent C. S. Lewis on the set.

Douglas Gresham: That's part of it. And not just on the set. To represent C. S. Lewis when they're writing the script, when they're designing the sets, when they're doing storyboards—just keeping an eye on everything to make sure that Narnia stays Narnia. And that has spun off into checking out all of the merchandise that's going to be produced—all of the toys, all of the apparel, every single thing to do with Narnia, I have to check to make sure somebody doesn't make silly mistakes. It's a full-time job. 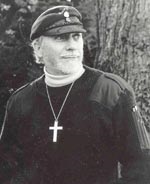