He sang gospel songs, but he also wrote darker tunes like the one in which he assumed the persona of a man who shot someone "just to watch him die." He was a country star who found his greatest success after he teamed up with a producer of rap albums. He produced a haunting music video shortly before his death at 70 that offered a stark, unflinching look at human mortality, yet he had—and continues to have—many fans many years his junior.

Johnny Cash was a man of contradictions, and Joaquin Phoenix—who plays the Man in Black in Walk the Line, a film developed with Johnny Cash and his wife June Carter Cash prior to their deaths in 2003, and overseen since then by their son John—had a chance to see those contradictions up close, when he accepted a dinner invitation from the Cash family.

"Usually when you get invited to something like that, you show up and it's, like, a table of 20 people, and there's a lot of forks, and you don't know which one to use," says Phoenix, whose film opens this Friday, as he chats with a gaggle of reporters in Los Angeles. "But it wasn't like that at all. There were about six to eight people, and it was all family. And John and June were just wonderful and unpretentious and welcoming."

After dinner, everyone migrated to the living room, and Cash picked up a guitar and began to strum. "He'd been strumming for a while and then he leaned over and said, 'I'm waiting for June to get my nerve up.' I was like, 'You're waiting for June to get your nerve up? That's so odd. I can't believe Johnny Cash is nervous.' And then she comes in, and he says, 'Will you sing a song with me?' And she says, 'Yeah.' And so they started singing a song." 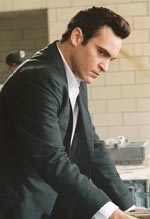