David Wilcox and Nance Pettit have put poetry from a variety of faiths to music on a new album—and are calling attention to the need for peace through conflict resolution.
Jewly Hight|October 17, 2005

David Wilcox—sophic, spiritual, folk-tinged singer-songwriter—has just completed a recording project like none other in his career. He and his wife of 13 years, Nance Pettit, dug up devotional poetry from a number faith traditions—including Christianity, Hinduism, Sufi Mysticism, Islam, Jewish Mysticism, and Zen Buddhism—polished the dust off and lovingly breathed new life into them for a new CD, Out Beyond Ideas. It's not what you'd call a "Christian album," though the artists behind it are Christians. Proceeds from album sales go to Partners in Conflict and Partners in Peacebuilding Projects, a conflict resolution initiative with the goal of world peace. In this interview, Wilcox and Pettit weigh in on what's meaningful about their new album, where the inspiration came from, and what it's like to harmonize together in the car. 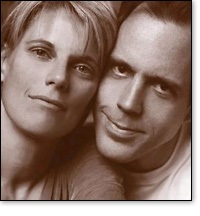 This is the first recording project that you've undertaken with your wife, correct?

Wilcox She's always writing with me, but this is the first set where we've had equal roles in singing and writing together.

What was it like working with her in this kind of collaboration? You seem to have a strong chemistry and connection.

Wilcox I'm very grateful that we sing together. It takes me out of myself.

Do you both approach things in a similar way stylistically or do you find yourselves each bringing something different to the table?

I think it's powerful that you two got to work together in this way.

Pettit It's one of the greatest blessings of our relationship that we get to do this together. It's not something that very many people get to do. I'm just really grateful that we have this possibility of musical collaboration.

Wilcox It's not just this project, but the way that we sing together. We could be driving down the freeway, and I'll play some playful little melody in my head, and as soon as I start singing it, Nance has a complimentary harmony. It always surprises me, and I'm so grateful that we have that.

What first made you think you could make these poems come alive by translating them into songs?

Wilcox The experience of hearing Nance sing one of them.

Pettit The last song on the record, "Awake My Dear," was one I wanted to remember, because it is so beautiful. The only way I remember anything is in a song, so I just thought I'd sing it. The next step was sitting around the fire with some friends one night and reading poems to each other. David and I got a musical inspiration in the moment, and that's when things started to take off and surprise us.

Wilcox This melody just came out of nowhere, and this guitar part that I never would have played just popped into being. The guitar parts especially were confounding to learn, because normally what I write is what's natural for me. But this stuff was like learning somebody else's tune.

How did you make the leap from fleshing these out together to deciding this should be a recording project?

Wilcox We were the last ones to get it. All our friends were saying, "Oh, I can't wait for the record," and we were still thinking this was something just for our living room. But after a while we started to realize that it was not up to us to say no, that these poems had momentum.

The poems themselves are from a variety of faith traditions. What do you think the inclusion of various voices adds to the project?

Wilcox I felt really grateful that all these different sounds moved us and opened our eyes. When they tried to pin Jesus down, and asked him, "What do you mean by neighbor?" he had an example that would ordinarily have been beyond the pale—"Not a Samaritan! Come on!" So here we're looking at these poems and finding this very personal experience of the sacred, and the world is pretty small. There are places where we're at war, and all these different things put us in conflict and make us think these people are our enemies. But music is different. Music has always been different. Even in WWII, when people thought the Germans were the enemy, there was still Beethoven and Bach. Somehow they didn't sound different. They sounded like music.

These aren't sacred texts. These are poems of personal mystic experience of the sacred, and it was beautiful to find myself threatened and then opened by the irrefutable yearning of the heart around the world. It's good to know that we have company in that experience.

What commonalities leapt out at you as you read the poems?

Was it limiting or liberating to already have the words in place and form the music around them?

Wilcox Both. Most poetry—and this especially—is really awkward. Poetry and lyrics are very different. Lyrics have to have a musical pattern, and this stuff doesn't. It has no meter and no rhyme. You can't just take an average sounding melody and sing these things. You have to find the way inside the emotion of it and let it guide you, so that the natural rise and fall, the inflection of the singing, really speaks to the meaning as best as possible. We had to give it time for the poem to kind of inform us as to how it was to be sung.

Was it an obvious decision for you not to do this for profit?

Pettit What came to me was that this vision was so big in these times of such distress between countries. Many of these poems come from Afghanistan, Iraq, Iran, places where we're in the most conflict right now. It struck me as interesting and ironic that these are love messages coming to us from another time and from the part of the world where we feel so much separation right now. We felt like every part of this project needed to speak about relationship and partnership and love—not about separation. We didn't want any emphasis to go on the two of us as songwriters and our individual gain from it.

Wilcox It's not coming from one living room at one time, but from voices that have been speaking for centuries, and they'll be around long after we're gone. We add our voice to the choir, but it's not our song.

Pettit And it's not our money, and it's not our project. We searched a long time for a project to donate to. That was a lot harder than we thought it was going to be—to find a project that was working in the world toward peace, that had a big vision of pulling people together, not a group that had a particular agenda.

Wilcox Multi-track diplomacy. Imagine sitting across the table with people you have a lot in common with, even though it may seem like you're on opposite sides of an issue. They'll bring people from two sides of a conflict that have something in common—they're doctors or journalists or whatever. Because they start with some common ground, they are better at talking about what they envision in terms of how to weave together their needs. The solutions that they come up with can then be offered to the politicians, who often find great relief in momentum that's already moving people together.

Did you feel that this project was particularly relevant right now?

Wilcox Not in the way that we sort of planned it or saw it coming. But it definitely feels like it has its own momentum for a reason.

Pettit If I'm remembering correctly, these songs started coming after 9/11. Dave and I, like most people, have felt really saddened by that whole experience. In view of what's happening to the world and the news, we can feel deflated by all world events, as if we have nothing to offer. The surprising thing is that multi-track diplomacy has been so effective in the last 15 years that there have been more peaceful negotiations since the Cold War than there have in the history of the United States. Even though we don't hear the good news, it's actually happening. This work that they're doing is changing the world. We want to spread the news to people. There is a way that we can have a positive effect on the world.

It's absolutely true that as we absorb all this information about what's going on here and abroad it can make us feel powerless. That's a neat dimension of the project.