Meet Mirabelle. She's recently transplanted from Vermont to Los Angeles. By day she sells formal gloves at Saks Fifth Avenue. By night she creates charcoal sketches and dreams of being seen—of mattering to someone—or so the narrator of this melancholy fairytale tells us. A moody soundtrack accentuates Mirabelle's loneliness and isolation, and removed images of L.A.'s glitter make even her own environment seem like it's a million miles away.

This, perhaps, isn't the set-up for a romance one would expect from the pen of "wild and crazy guy" Steve Martin. But indeed, Martin adapted the screenplay for Shopgirl from his own best-selling novella of the same name. And while the book is a well-crafted exploration of the psychology behind complicated relationships, the movie turns out to be more of a mood piece that, aside from a few short pieces of narration, leaves the audience to largely draw its own conclusions as to what motivates the main players.

First on the scene is Jeremy (Jason Schwartzman), a poorly groomed oddball whom Mirabelle meets at the Laundromat. She's lonely enough that she gives him her number, and their date is predictably disastrous in a way that's funny only because it's happening to someone else. But it does result in one of the best bits of dialogue in the movie: 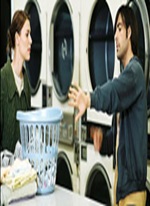 It's not long before Ray Porter (Steve Martin) enters from stage left. A handsome 60-ish businessman, he buys a pair of gloves from Mirabelle and has them sent to her apartment with an invitation to dinner. She accepts and is, also predictably, smitten by his confidence and his seeming desire to truly see her. As suave as Jeremy is slack, Ray sparks Mirabelle's imagination.

Unfortunately, most of what Mirabelle hopes for her relationship with Ray is based on her imagination. He moves very quickly to define the relationship as a purely sexual one, and Mirabelle angles to make a place for herself in his life. She tells Jeremy to buzz off, and he does—going out on the road with a rock band in a rather implausible turn of events. Perhaps even more implausible is the way life on the road becomes a time of self-improvement for Jeremy—an evolution we see as the movie cuts back and forth between Ray and Mirabelle's romance and Jeremy's shenanigans, providing a bit of comic relief and telling the audience that Jeremy's role in Mirabelle's life isn't over yet.

Steve Martin seems to be channeling Bill Murray circa Lost in Translation for his portrayal of Ray. He remains aloof even in the presence of real affection, and there's a fill-in-the-blank quality to Ray's facial expressions that helps him remain something of an enigma. Is he truly falling for Mirabelle? Or is that pity he feels for her? Or perhaps all those pensive stares from the windows of his expensive Hollywood Hills home and his private plane are meant to express a bit of pity for himself?

For her part, Claire Danes delivers on the promise of her earliest work in the ABC's critically acclaimed drama My So-Called Life. She has a gravitas and grace to her that hearkens back to starlets of the 1930s and '40s. And while she is incredible skinny ("probably a size 2," one of her co-workers cattily supposes), she also manages to look real—a bigger-than-average nose, less-than-delicate hands, a not-so-lovely face when she's crying. Her beauty rings true.

The movie itself is rather beautiful—all spot lighting and moody pictures of L.A. traffic and Danes' luminous skin. It's notable that Mirabelle's youth is rarely juxtaposed against Ray's age. In their bedroom scenes, she is often in various stage of undress while he remains fully clothed—avoiding the visual reality of her smoothness against his wrinkledness, reinforcing the fairytale air of the film.

Early in the movie Mirabelle listens to a call-in radio program about relationships; a Dr. Laura-type commentator recites research that proves how important it is for a woman to be held in a man's arms. Apparently it triggers the release of important hormones that promote a feeling of well-being and security. By the end of the movie, Mirabelle has found a pair of arms to be held in. It's not exactly a "happily ever after," but this is L.A. What do you expect?

Shopgirl is rated R for some sexual content and brief language. There are many scenes of Mirabelle in various stage of undress, including a shot of total nudity from behind and a hazy Polaroid picture shot from a distance of her lying naked, face up, on the a bed. She sleeps with both Jeremy and Ray, and there's a rather lewd sex scene involving Jeremy and Mirabelle's co-worker, Lisa. Language is mild.

While Steve Martin's many fans grumble about many of his recent, disposable, creatively bankrupt choices (Cheaper by the Dozen 2, anyone?), the famous comedian continues to make unconventional choices from time to time. In this stage of his career, he seems more interested in writing novels and plays than in pushing himself as a film star. And that may be why his performance in Shopgirl is getting so much praise—his character is his own invention, straight from the pages of his own novel.

Director Anand Tucker (Hilary and Jackie) guides Martin, Claire Danes, and Jason Schwartzman through this artful, if dissatisfying, comedy about a young woman torn between an aging romantic and a younger suitor.

"Tucker does his best with this material—and achieves the intended bittersweet tone—but somehow it all feels patently unreal," writes Harry Forbes (Catholic News Service). "Despite a feel-good ending, and (presumably) a morally sound resolution, the ethical choices made by these characters—all in the name of the story's theme of 'the quest to find connection'—are dubious. Beyond that, strictly as entertainment, Shopgirl lacks momentum."

Josh Hurst (Reveal) says, "It's a romance for grown-ups, and it's so subtle that you may not really grasp what's going on until after it happens. Give credit to Martin for crafting a warm, inviting screenplay from his heartfelt story. The writing here is filled with the same kind of wit and grace that characterize Martin's writing for The New Yorker—fans of his written works will be in moviegoing heaven."