Standing in a stable, a man stares, thunderstruck, at a pregnant woman. It's unmistakable—that baby is the hope for humankind's redemption. The severity of this revelation leaves him weak in the knees and almost speechless. Almost.

Is he taking the Lord's name in vain? Perhaps. Or perhaps he's being reminded of something … a similar occurrence two thousand years ago.

In Alfonso Cuarón's movie Children of Men, the name of Christ is anything but a throwaway expression. Echoes of the gospel—both subtle and obvious—occur at every turn, reminding us that God gave us hope by providing a vulnerable, miraculous child to a dark, dying, violent world. We watch as a man and a woman take enormous risks, seeking help among the humble, and fleeing from cruel and malevolent men in power. It can't be an accident that the film opens in U.S. theaters on December 25.

Still, for all of these allusions to the Christmas story, Children of Men bears little resemblance to The Nativity Story, the more traditional depiction also now in theaters. Cuarón has crafted an intense, decidedly R-rated parable that offers a bleak vision of the world's future.

Children of Men is set in London in the year 2027. But this isn't the futuristic nightmare of Blade Runner, the dreamscape of Brazil, the techno-metropolis of The Fifth Element, or the punishing wasteland of The Road Warrior. Cuarón's movie draws us into a world that bears a striking resemblance to our own. Where Spielberg would have become preoccupied with imaginative gadgetry, as he did in Minority Report, Cuarón prefers to keep our focus on the story and its relevance. (Cuarón recently told me in an interview, "I wasn't ... 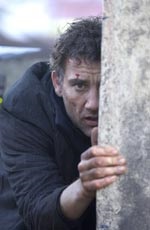