As a Pentecostal, I'm not too thrilled with the way kids from my denomination are depicted in Jesus Camp. Matter of fact, this new documentary ticks me off—for a number of reasons.
By Rich Tatum|February 7, 2006

Jesus Camp, what an experience. Heidi Ewing and Rachel Grady's investigation into the hidden world of one Pentecostal kids' camp simultaneously delighted me, fascinated me, and embarrassed me. As a Pentecostal myself, I love this film. And I hate it.

The premise for the documentary, now playing in limited theaters, is simple: follow three pre-teens from Missouri heading to a summer camp in Devils Lake, North Dakota. Document their experiences there, and follow up on the aftermath. Simple enough.

Liberals don't get us

While Ewing and Grady admit they honestly liked the people they were documenting, there's no denying they don't get them. Ewing and Grady—recently interviewed by CT Movies—are outsiders to the culture they depict.

While this alone isn't bad—documentary filmmakers set out to learn and teach simultaneously—it can lead to gross errors of representation and interpretation. The risk of bias and misrepresentation is no less real for liberal New York democrats filming Pentecostals than it would be for a Pentecostal documenting a convention of Darwinists.

Early in the film we are introduced to our angry guide for this tour of the evangelical underworld: Mike Papantonio, liberal Methodist, top-flight lawyer, host of Air America's Ring of Fire talk show, and one of Air America's board members. He informed a caller to his program—and us by the way—about "some new brand of religion out there. … And right now everything they do they say they do in the name of God: that we need to go to war in the name of God; we're being told that George Bush, of all people, ... 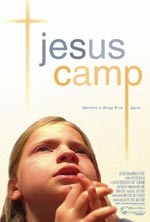