Born to a Catholic family and later attending a Jesuit school, Alfred Hitchcock often incorporated religious imagery into his films—even though he had a love-hate relationship with faith.
Peter T. Chattaway|July 25, 2006

The Jesuits have a saying: "Give me a child until he is seven and I will give you the man." That motto could almost be said to describe Alfred Hitchcock, the legendary film director and TV producer who made over 50 movies in a career that spanned half a century. Born to a Catholic family in London in 1899, Hitchcock didn't begin his studies at a Jesuit school until he was a year or two older than seven, but the influence of his religious upbringing can be seen throughout his work.

Hitchcock grew up in a strict Catholic family that went to Mass regularly at a church pastored by one of Hitchcock's cousins, a priest. Hitchcock himself was, briefly, an altar boy. In 1908, he began attending St. Ignatius College, a Jesuit school.

In later years, he tended to downplay the religious significance of his education. In an interview with film critic turned director Peter Bogdanovich, Hitchcock credited the Jesuits with teaching him "organization, control, and to some degree analysis …. I don't think the religious side of the Jesuit education impressed itself so much upon me as the strict discipline one endured at the time." The religious influence at school consisted mainly of fear, he said, "but I've grown out of religious fear now."

Nevertheless, Hitchcock was a practicing Catholic for most of his life. His wife Alma, a film editor, converted to Catholicism before their marriage in 1926, and they worked and lived together until his death in 1980. They attended Mass weekly, and they quietly made several generous donations to Catholic churches and charities. In 1952, their daughter Patricia married the grandnephew of the late Cardinal William O'Connell, who had been a powerful archbishop in Boston.

Hitchcock, one of the most successful ... 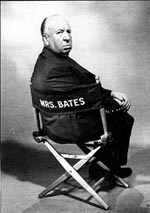