How could the American Film Institute have missed The Return of the King when picking its list of the 100 Most Inspiring Films of All Time? And not a single movie about Jesus? What's up with THAT?
by Mark Moring|June 20, 2006

Last week, the American Film Institute posted its list of the 100 Most Inspiring Films of All Time. It's a good list, especially with It's a Wonderful Life and To Kill a Mockingbird occupying the top two spots. Rocky, Mr. Smith Goes to Washington, and Breaking Away are all in the top 10. Very nice.

But like all such lists, it's certainly open to criticism. My first gripe is specific enough: Where in the world is The Lord of the Rings: The Return of the King? If that's not one of the 100 Most Inspiring Films of All Time, then I'll be a hobbit's uncle.

At first I thought the omission was because the film isn't "American." It was primarily made in New Zealand by a Kiwi director (Peter Jackson), and the AFI criteria state that qualifying films must have "significant creative and/or production elements from the United States." But then I checked the list of 300 nominees from which the AFI culled its winners, and the first LOTR film, The Fellowship of the Ring, is a nominee (though it didn't make the top 100).

So, evidently, the LOTR films were eligible after all—but The Return of the King didn't even make the list of nominees. So, the AFI doesn't even count it as one of the three hundred most inspiring films in history!

How could they have missed it?

Were they not inspired when Gandalf comforts a frightened Pippin during the siege of Minas Tirith, telling the young hobbit about a glorious heaven that awaits after death: "No, the journey doesn't end here. Death is just another path, one that we all must take. The grey rain-curtain of this world rolls back, and all turns to silver glass, and then you see it… . White shores, and beyond, a far green country under a swift sunrise."

Did they not get goosebumps when Aragon rallies ... 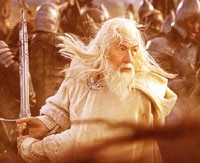