In the last few years, we've seen two prequels to The Exorcist and a remake of The Amityville Horror, so it was probably only a matter of time before someone got around to reviving that other popular 1970s supernatural horror movie, The Omen. The producers of this film had an especially timely marketing hook: a release date (6/6/06) that lends itself to ad campaigns with a mark-of-the-Beast theme.

In other ways, though, the remake of The Omen cannot help but seem as dated as the movie on which it is based. This is partly because the new film is extremely faithful to the original. Composer Marco Beltrami does not just emulate the style of Jerry Goldsmith's Oscar-winning score for the original movie, he even re-uses some of its themes. And screenwriter David Seltzer does not adapt his earlier script so much as dust it off and tweak a few time-sensitive details; for example, where the first film speculated that "the Common Market" was the fulfillment of a prophecy about the Roman Empire—a key piece in the end-times puzzles of Hal Lindsey and others at that time—the new film refers to "the European Union" instead.

However, most of the other biblical interpretations remain as they were, and they just don't sound as imminent or, well, ominous as they once did. Take, for example, the poem that is recited several times in both films, which refers to the return of Jews to Zion. The modern state of Israel was only 28 years old when the original film came out, and at that time, it was alarmingly common for evangelicals to speculate that the Rapture or the Second Coming might happen before the nation's 40th birthday. (As one who grew up in the evangelical subculture at that time, I vividly remember thinking I might never see ... 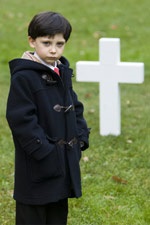