Director Tom Shadyac, a Christian best known for his mega-hit Bruce Almighty, has come a long way since Ace Ventura. Here, we take a look at Shadyac's faith and films.
Eric David|March 7, 2006

For a filmmaker of faith, presenting a supernatural worldview in a movie can be a major obstacle to getting it made. Hollywood executives would often rather remove the supernatural from a story, demythologizing and disenchanting it (e.g. The Last Temptation of Christ, Troy, Tristan + Isolde), despite the fact that this method does not prove lucrative.

Even so, Hollywood sometimes takes a chance on the supernatural, especially when it's couched in a "politically correct" way—for example, in fantasy (Narnia, Lord of the Rings), horror (Emily Rose), or, as we will examine here, comedy. In such cases, Hollywood—and moviegoers—will allow for the existence of the supernatural, the mention of a deity, yea even for the appearance of God himself.

Tom Shadyac, a professing Catholic who reads Augustine and Merton, was the youngest joke writer ever for Bob Hope. He graduated UCLA film school in 1989 and then worked in television for a few years before making the leap to feature films. Shadyac also dabbles in standup comedy and guest stars on TV. He works frequently with Jim Carrey and screenwriter Steve Oedekerk.

When Christian interviewers asked him about depicting unmarried sex and characters who curse, Shadyac replied, "One of the challenges of the church is to accept humanity for all it is. And I as a filmmaker am not going to deny that. I think it's important to acknowledge that we are imperfect … The Bible is chock-full of some racy stuff—a lot of sexual impropriety, violence, all kind of things. But the point of the Bible is that it's not about a moment, it's about the entire journey. Because if the Bible hadn't ended where it ended, it'd be a downer of a book. But it ends with redemption … ... 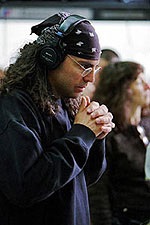