At the beginning of Hoot, the film version of Carl Hiaasen's Newbery Honor-winning book, Roy Eberhardt (Logan Lerman) is riding the bus for his first day at a new school. A boy about his age runs by the bus with no shoes on, and the identity of the shoeless sprinter consumes Roy. He must find out who this is.

What is the question?

He dwells on it for days, and somebody finally asks, "Why do you care so much?" Roy says, "I don't know."

Neither does the audience. Because he had no shoes? Because he was fast?

The only reason Roy seems to be seeking the boy is because it will advance the plot. For a film marketed as a mystery adventure for kids, it's a bad sign that the biggest mystery is why any of the characters do the things they do. A kid gets arrested without any evidence whatsoever. People who hate each other magically become best friends. Police chiefs yell—apparently just because that's what police chiefs do. And instead of going to a hospital, a teen turns to Roy for medical help—even though Roy is neither a friend nor a doctor. Because so many characters and their actions are so contrived and unexplained, nothing is believable. Worse, Hoot is chock full of unclear and even troubling messages to kids.

The film has good intentions. Set in Florida, Hoot champions environmental causes and the preservation of beauty and wildlife. When Roy finds the shoeless sprinter, Mullet Fingers (Cody Linley), he's pulled into a campaign to stop the Mother Paula's Pancake House from illegally building in a environmentally-protected area. Of course, no one in the town apparently remembers that the piece of land is protected because of its population of endangered owls. So, along with Mullet's sister, Beatrice (Brie Larson), the boys have to take on not just bloodthirsty bullies, but also various adult villains—greedy land developers, corrupt politicians and clueless cops—to ensure nature is protected.

And perhaps that's the biggest problem with Hoot. Instead of being strictly about preserving nature, Hoot becomes a film where kids not only need to save the day, but to go against all the adults around them. Why? Because the adults are two-dimensional dolts; they're all either incompetent or ruthless. The corporate head of Mother Paula's is so smarmy, greedy and unredeemable, he should have a handlebar mustache. And Luke Wilson's Officer Delinko is the standard bumbling movie cop who can't even get out of his car without turning the windshield wipers on. 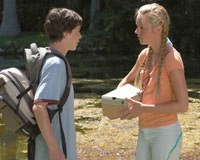 Hoot's unintended anti-authority message is worsened because people's actions are so contrived. For instance, at one point, Roy is onto some evidence that proves Mother Paula's greedy land developer knew all along that the ground was protected by law. Officer Delinko stumbles in on Roy in the library, where he's researching the case. For some reason, Roy just takes off running and Hoot falls victim to the all-too-familiar "run from police" movie flaw—which happens when a screenwriter realizes that telling the cops everything would solve the hero's dilemma. So instead, the character runs.

Because of this storytelling shortcut, Hoot inadvertently says: 1) Adults—and especially police—are not to be trusted and 2) If kids want results, they should do it themselves. Roy at least suggests that the teen trio seek adult help; Mullet and Beatrice say they've tried that before, but everyone was too excited about a new pancake house to listen. (Really? Everyone? Over pancakes?) So, even with evidence in hand, the teens resort to vigilantism. And thus, the film advocates that nature needs to be protected no matter what. The ends justify the means. 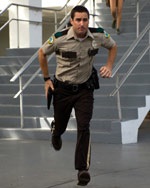 And those means get troubling at times. Mullet Fingers, named for catching mullet fish with his fingers, loves nature, but his attempts to preserve it are shocking. Mullet, a strange character from the get-go, was apparently sent to military school by his parents, and has since gone AWOL. His sister is hiding him while he acts out his nature-loving terrorism. He puts alligators in a Porta Potti, spray paints the windows of a police car, unleashes snakes on a work site, steals private property, and kidnaps a man and holds him hostage.

While Beatrice and Roy do admonish Mullet when he wants to drive the land developer's Hummer into a lake, most of his actions go unchecked. He risks his life and others' to save some owls. The filmmakers let his actions stand as warranted and even heroic. He goes unpunished and is unrepentant. In fact, the movie ends with Mullet Fingers apparently still on the run. And it seems he is ready to do more vigilante justice on the behalf of nature. The movie fades to black on Roy and Mullet walking by a sign for a new condo development on the beach. Roy says, "Florida has its way of keeping us busy." Will they use proper channels next time? Will they break more laws? How far will they go?

The kids, willing to do anything to save the land, listen in on more dumb adults

Not having read Hoot, I don't know how faithful the film is. But the movie comes from Walden Media, which has soared with faithful adaptations of The Lion, The Witch and The Wardrobe, Because of Winn-Dixie, and Holes. Walden co-founder Micheal Flaherty has said the company learned its lesson about unfaithful adaptations when the Around the World in 80 Days, which was turned into a Jackie Chan action flick, flopped and was panned. So, Hoot may be a faithful rendering. (Still, the first TV spots for Walden's upcoming Charlotte's Web includes farting cows—definitely not in E.B. White's beloved original.)

Hoot author Hiaasen, known for very adult books like Strip Tease, did have a hand in making this film. So, it's possible that Hoot's problems—bad behavior without consequences, idiot adults—are true to his story. Hiaasen has said children are smarter than adults and that he, like Mullet, used to mess with construction sites. But really, no matter who's to blame, Hoot is problematic all the same.

In addition to the sloppy writing and ridiculous characters, almost everything else in Hoot is just as weak. The film is grainy, some scenes are so dark you can't see the action, and the acting ranges from average to embarrassing. And I kept thinking about how you never notice those lesser Oscar categories like "sound editing" until they're really bad; at one point, Beatrice is speaking from under a bed, but it sounds like she's doing a voiceover.

The only highlight to the film is a sequence of outstanding nature cinematography in Florida's Everglades. Oh, and there's one funny joke. But that doesn't make this film a hoot at all.

Hoot is rated PG for mild bullying and brief language. Roy has his face pushed into a window and punches the bully in the nose. Other violence (like golf balls hitting people in the head) is played for laughs. More troubling are teens who take the law into their own hands with vandalism and kidnapping. There is one scene where a character has a pretty gruesome dog bite on his arm.

When it comes to adapting popular children's books to the big screen, Walden Media is hit and miss. Sometimes they're faithful—;Because of Winn-Dixie, Holes, Narnia—and sometimes … well, not so much (Around the World in 80 Days).

With Hoot, the studio continues its tradition of adapting celebrated novels into all-ages cinema. Boasting Newberry-winning source material, themes of environmental protection and preservation, and a cast that includes Luke Wilson and Holes' Tim Blake Nelson, it's loaded with potential. But …

Most Christian critics don't think Hoot deserves a spot on the shelf beside Walden's past hits.

Steven Greydanus (Decent Films) is similarly disappointed: "Now, for the first time, Walden has made a family film adaptation not worth watching, and the possibility of Holes having been something of a fluke is getting harder to ignore. A year ago, I would have been sanguine about Walden's upcoming versions of Charlotte's Web and Bridge to Terebithia. I'm still sure, given the source material and Walden's track record, that they'll be better than Hoot, but that's not saying much, alas."

Tom Neven (Plugged In) objects to the film's skewed sense of morality. "Hoot is indeed inherently educational, but along with teaching the positives of teamwork and environmental responsibility, it also confirms for kids that lying and cheating are acceptable—even desirable—when it comes to doing great things with your life. Sure, the kids bravely take on the corrupt powers-that-be in order to defend the defenseless owls. It's just that lying is integral to the game plan. So is vandalism, defying properly instituted authorities and getting other authority figures to lie for them. And at no time do they pay a price for these actions or get called onto the carpet for it."

Ken Goding (Christian Spotlight) agrees. "I was very disturbed by the message that Hoot delivers. The heroes fight evil with evil, and there is little recourse for it. When there was a short father-son talk, I hoped that this would be brought out, but sadly the father did not do a very good job of it. The motives are right, saving the owls is a good cause, but illegal activity to stop people from doing wrong can't be justified."

Meanwhile, Lisa Rice (Crosswalk) is one critic willing to sing Hoot's praises, saying it's "well-written, produced, and acted, and delivers a notable family film experience void of the usual trash seen in other teen fare such as Scary Movie 4. Regrettably, nowadays the typical Hollywood teen movie is filled with large doses of sex, drugs, alcohol, and attitude, but audiences won't find many of these elements in Hoot."

David DiCerto (Catholic News Service) complains that the film has "a weak script and a slow-starting plot," but ultimately concludes that "with quality family entertainment an endangered species, it's worth giving a 'hoot' to movies that buck the trend."

Most mainstream critics are ready to give Hoot the boot.

1 of 4
Mullet Fingers (Cody Linley) and Roy (Logan Lerman) mull their next moveRoy and Beatrice (Brie Larson) try to figure out how to save the wildlifeLuke Wilson plays Officer Delinko, a bumbling idiot of a copThe kids, willing to do anything to save the land, listen in on more dumb adults