Another election year, another Kennedy movie. Six years ago, when lawyers for Al Gore and George W. Bush were debating the finer points of interpreting dangling chads, Thirteen Days—a riveting dramatization of John F. Kennedy's handling of the Cuban Missile Crisis in October 1962—came out and reminded us how critically important the right kind of leader could be in an unforeseen moment of crisis. Now comes Bobby, a look at the guests and employees who were at the Ambassador Hotel on the night of Robert F. Kennedy's assassination there in June 1968.

It is tempting to wish that Steven Culp, the actor who gave such a remarkable Bobby Kennedy impression in Thirteen Days, had been brought back for this one; after all, six years have gone by in the real world, just as the new film takes place six years after the earlier one! Instead, writer-director Emilio Estevez maintains a reverential distance from his title character, depicting him only through news footage and audio recordings. Kennedy himself is never integrated into the drama—except for the climactic moments at the hotel, when all we see of him are brief looks at the back of a stand-in's head, like the non-depictions of Jesus in 1950s Bible dramas.

It is clear from the opening and closing credits that Estevez, who was only six years old when Kennedy was shot, wants to depict Kennedy as a sort of savior; Bobby is important to this film not as a human being, but as a symbol of hope cut down in his prime. We are told that he had the power to heal the racial divide, to bring about peace, and no doubt many people saw him that way and still see him that way.

And yet, one cannot help but wonder whether Bobby Kennedy's political life would have turned out like that. ... 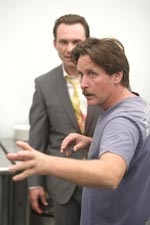