The films of Krzyzstof Kieslowski are haunted by spiritual imagery, and yet the Polish director never really found grace—or got past "the God of the Old Testament... who ruthlessly demands obedience."
Eric David|November 1, 2006

Krzyzstof Kieslowski, one of Poland's great directors, was reticent to talk about his beliefs.

"Faith is a possibility," said Kieslowski, who died an untimely death at age 54. "In Poland, it is an obligation." In fact, he once told an interviewer that he thought the church in his country actually hindered contact with God.

He told another interviewer, "I am not a non-believer," and yet another, "I think that if someone like a God above exists, someone who made everything around us, and made us too, then we very much slip out of his grasp."

Yet Kieslowski clearly had an interest in the spiritual, religious and metaphysical aspects of his characters, not only in his subject matter, but also in his transcendental style.

Influenced by Bergman, Bresson and Tarkovsky, Kieslowski's filmmaking is characterized by ambiguity, irony, philosophical discussions, long takes, and close-ups of objects, hands and faces. Yet unlike most European directors, his films are enormously engaging; Kieslowski captivates the attention with suspense, humor and ruthlessly efficient editing.

In his films, though, he was open to questions of faith, while he left room for the "searchers," as he termed himself. "All my films," he said, "are about individuals who can't quite find their bearings, who don't quite know how to live, who don't really know what's right or wrong and are desperately looking."

After a distinguished career in documentary filmmaking as part of the "Cinema of Moral Anxiety" (which also produced directors like Agnieszka Holland and Krzyzstof Zanussi), Kieslowski abandoned the form because he felt afraid of filming "real tears" and felt he could more accurately portray the world and human emotion through actors. 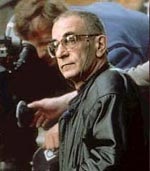