The task of the novelist once was the presentation of the entirety of a life. Think Victor Hugo, think Great Expectations: we follow a child into adulthood, perhaps through to death, looking on from a privileged vantage point outside their circumstances. Tracing the vast arc of a human life, we glimpse what a human soul might look like viewed as a totality, outside of time.

It's a God's-eye view, a perspective our own lives don't afford us.

What an extraordinary privilege it is, then, to experience any of the films in director Michael Apted's "Up" series, the most recent of which, 49 Up, opens in select theatres this week before releasing wider in the coming months. For the first time in history, we see actual human lives charted over the span of decades, with documentary footage of the same individuals first encountered in a London playground at seven years of age, then revisited every seven years.

In 1964, the BBC's "World In Action" program produced an episode entitled "Seven Up!" which brought children from radically diverse economic backgrounds together for a day at the zoo, observing them at play and pulling each of them aside for a chat about life's Big Questions: "What do you want to be when you grow up?" "Do you believe in God?" "Do you have a girlfriend?"

It was marvelous, thought-provoking television. With the Jesuit dictum "Give me a child until he is seven, and I will give you the man" as a starting point, the original program suggested that a great deal of the future had already been determined for these children, based on their economic class, family backgrounds and educational prospects. But what began as sociology with an axe to grind transformed to something much more personal and mysterious, even spiritual, ...

Join in on Facebook
Tags:
None
Posted:
October 6, 2006
More From:
Ron Reed 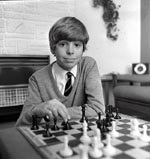 49 Up
expand
hide this