Ever wonder why moths flutter around bright lights at night and ask yourself, "Don't they know that they'll burn themselves up?"

And yet, so many of us play out the same sad drama. Restless with longing, we respond to dangerous temptations and indulge misguided passions. And then we—and sometimes our families—pay for it.

This metaphor comes to vivid life in Todd Field's riveting new film Little Children. Working from a screenplay that he and Tom Perrota adapted from Perrota's novel, Field paints a deeply disturbing picture of a cozy New England neighborhood in which everyone is pursuing happiness in misguided ways.

In fact, the movie will be too disturbing for some, because it is unflinchingly truthful about sins such as lust, sexual infidelity, and pedophilia. And while Perrota's story is profoundly moral, Field brings it to life in illustrations so explicit that some viewers may be led into temptation themselves.

This is Todd Field's second film about the reckless pursuit of satisfaction. The first, In the Bedroom (2001), reminded us that our desire to judge and punish evildoers can easily lead us into evils of our own. Similarly, Little Children shows what can happen when we respond to disappointment and longing with childish recklessness.

But Little Children is more ambitious. Field skillfully weaves wry humor, absorbing drama, and nerve-wracking suspense in a style that reflects the influence of Stanley Kubrick. (Field had a small role in Kubrick's Eyes Wide Shut, another film in which lustful fantasies have a corrosive effect upon a marriage.)

It took some kind of mad genius to cast Will Lymon, the voice of PBS's "Frontline" documentaries, as the film's narrator. Lymon describes these relational catastrophes ... 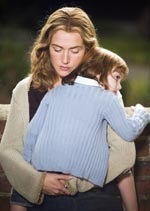