The second most effective part of the legal thriller Fracture is the pitting of two similar men—in different places of life—on a collision course.

On one side is Ted Crawford (Anthony Hopkins), an accomplished man of precision and detail. Cunning, and intelligent, Crawford is a man unaccustomed to losing. He works expertly and efficiently to get what he wants. Nothing gets by him. He's discerning and methodical. He looks closely into even the minutest details; he prides himself for even being able to find the flaw in every egg's shell.

On the other side is Willy Beachum (Ryan Gosling), an up-and-coming deputy district attorney. He too is unaccustomed to losing—boasting a 97 percent prosecution rate. Also calculating, proud and precise, he trades away sure-to-lose cases, launches well-executed plans to get what he wants, and never misses the details needed to win. He knows what it takes to get ahead and he does it.

Their trajectories collide when Crawford hatches a plan to murder his wife, shoots her, gives a signed confession and surrenders the weapon full of prints. It seems to be an open-and-shut case for Beachum. But soon, the near-perfect prosecutor finds that he may be up against the perfect crime.

The most effective part of Fracture is the casting of those roles. As I watched the cat-and-mouse chase, I felt like I was seeing a showcase of acting's present and future: one of the greatest living actors cast as the wily, wise vet, and one of Hollywood's most promising young talents (Gosling was nominated for an Oscar last year for Half Nelson) as the rising star. It's a great feature bout.

Fracture sizzles when it sets Gosling and Hopkins in opposition, places them in the same room, and lets them go. They ... 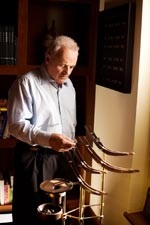