The tagline for The Hoax reads, "Never let the truth get in the way of a good story."

The film, based on possibly the greatest literary hoax of all time, is indeed a good story—with stellar acting, sharp directing and intelligent intrigue. But, it leaves viewers with a nagging suspicion that the movie's tagline may have also been an unintended mission statement.

The hoax in The Hoax is the infamous 1970s ruse by author Clifford Irving (Richard Gere) who claimed he'd gotten permission to write the first authorized autobiography for recluse millionaire Howard Hughes. After Irving produced letters authenticated to be from Hughes, publisher McGraw-Hill agreed to pay nearly $1 million for the book. Months later, the book went to print—despite protests from Hughes' lawyer that it was a fake. As evidence mounted, Irving eventually admitted it was all a lie. He'd never met Hughes. His entire book, which never reached bookstores, was taken from old interviews, stolen manuscripts, private Time-Life files, and Irving's imagination.

How'd this all happen? The film's Irving is a struggling author who sees a lucrative fiction deal with McGraw-Hill fall apart and is left in debt and despair. In a fit of frustration, he tries to save face at McGraw-Hill by blurting out that he has the "greatest book of the century"—without any clue what that means. Irving then stumbles onto the perfect scheme: Pretending to be the writer of the memoirs of a famous man no one has contact with. (Rumors of the day had it that Hughes was dying, insane or already dead.) Irving figures that he can't be discredited if Hughes doesn't come out of self-imposed exile to refute it. With the help of his friend Dick Susskins (Alfred Molina), Irving goes ... 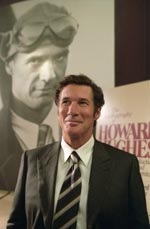