There is no historical event so grand, so tragic, so complex that it cannot be reduced to a love story. From the American Civil War to the sinking of the Titanic, the images that dominate our memory of the past have often come from the utterly fictitious movies that use these events as epic backdrops for sweeping romances.

So when Daryl F. Zanuck, the founder of 20th Century Fox, produced Brigham Young in 1940, he knew it was not enough to lay out the historical facts, even in a highly mythic form. His film was designed to cast the early Mormon leader in the best, most heroic light possible, but the title role went to a lesser actor named Dean Jagger (who, incidentally, went on to convert to Mormonism some years later). The star of the film was matinee idol Tyrone Power, who played a young Mormon lad who falls in love with a Christian girl as the Mormon pioneers make their historic trek to Utah.

Writer-director Christopher Cain has the exact opposite agenda in September Dawn, but he follows a similar narrative logic. The film concerns the Mountain Meadows Massacre, in which over 100 men, women and children, passing through Utah in a wagon train in 1857, were slaughtered by Mormons and their Indian allies—the largest mass murder of Americans by other Americans until the Oklahoma City bombing in 1995. And the main lens through which we witness this atrocity is a tale of forbidden love between a young Mormon man and a young Christian woman.

This might not be so bad if the love story itself were the point of the movie. The two young lovers, Jonathan Samuelson (Trent Ford) and Emily Hudson (Tamara Hope), first notice each other when he accompanies his father (Jon Voight), the local Mormon bishop, on a visit to the wagon train. ... 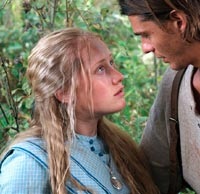