This will sound like an odd thing to say about a comedy, but Walk Hard is an ambitious movie. It starts with 6-year-old Dewey Cox picking up a guitar in a rural general store and belting out a blues number, and proceeds to show him singing with his polite high school band, then going through an Elvis phase, on into protest songs, Dylan-esque songs with incomprehensible lyrics, rock, hard rock, frenzied growling rock, music like the Beatles in their India phase, music like the Beach Boys—oh, you name it, it's in there. So in addition to telling a hilarious, fast-paced story that hits all the clichés of singer-biography movies (lots of drugs, lots of rehab, lots of wives, plenty of costume changes, hairstyle changes, and the accumulating wrinkles of age), the film must also deliver spot-on music parodies.

What's more, this is music that audience members know very, very well, so it's not like parodying, say, Puccini. Those watching the film could sing the original models of these songs in their sleep. The performer, too, must be top-notch, and not just a good actor but a singer able to go from Bobby Darrin to Bob Dylan, John Lennon to Johnny Cash, in a heartbeat.

Well, it works. If only for the music numbers, this movie deserves a standing ovation. Much of the credit goes to John C. Reilly, an actor with a rubbery face and the voice of an angel. He played simple, good-hearted men in two of my favorite recent movies, Magnolia (1999) and The Good Girl (2002), but it was in Chicago (2002) that I first heard him sing, and the sweet sadness of his "Mr. Cellophane" placed a heart at the center of that frantic, heartless story.

In Walk Hard, written and produced by Judd Apatow and directed by Jake Kasdan, Reilly has to produce ... 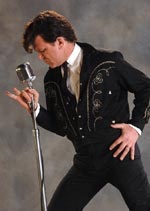