Katherine Paterson, whose children's book, Bridge to Terabithia, is now a film coming to theaters this week, says kid lit doesn't have to be "safe." After all, the Bible sure isn't.
by Peter T. Chattaway |February 12, 2007

Katherine Paterson once planned to be a missionary. She was born to missionary parents in China, and she spent four years in Japan as a missionary herself. But after returning to the United States to continue her education—and after meeting and marrying a young Presbyterian minister—she gave all that up. And then she became a writer.

Some of her earliest novels—like Sign of the Chrysanthemum, Of Nightingales that Weep and The Master Puppeteer—reflected her love of Japanese culture. And some of her non-fiction books—like Who Am I?, Images of God and Consider the Lilies: Plants of the Bible, the latter two written with her husband John—have reflected her own religious background.

But the book for which she is probably best known is Bridge to Terabithia, a story about two children—a girl named Leslie and a boy named Jess—who create an imaginary kingdom for themselves in a secret grove. It won the Newbery Medal in 1977 and has now been turned into a theatrical movie by Walden Media, the company behind The Chronicles of Narnia.

Paterson spoke to us about the book, the film, and the meaning of "story" in a phone interview shortly before the movie's release this Friday. (Warning: This interview addresses story elements that will be spoilers to anyone who has not read the book or seen the film.)

Bridge to Terabithia was filmed for TV in the 1980s, but this is the first time it has been adapted for the big screen. Did you envision a movie coming out of this book at all? 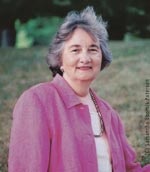