Catch and Release is the sort of movie I'd rather not have to review. Not because I didn't enjoy it—on the contrary, I laughed and almost-cried and rooted for the romance, heartily. It's just that the review process forces the analysis of pesky details like consistent character and plot development. But Catch and Release is best enjoyed on the surface—a big-hearted light-headed story that isn't as deep as it wants to be, but still manages to entertain.

The film opens with the funeral of Grady Douglas, a young man tragically killed in a boating accident days before his wedding. Jennifer Garner (Alias, 13 Going on 30, Elektra) plays Gray Wheeler, Grady's grieving bride, who must bear the heavy irony of burying the man she loves on the day she was planning to marry him. The wake is almost more than Gray can take, particularly when a floral truck bearing the inscription "Flowers for All Occasions" is sent away to exchange bridal bouquets for funeral wreaths. 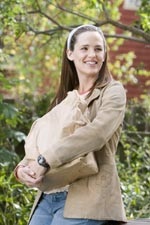 Misery loves company, and Gray soon finds herself in the company of Grady's closest friends and former housemates. Kevin Smith (Clerks, Jay and Silent Bob Strike Back) has all the film's best lines as Sam, a Kevin Smith-esque, food-obsessed wise guy with a tender side. Sam still shares the house with Dennis (Sam Jaeger), the reliable and responsible good guy whose emotional burden includes not only grief for his fallen friend but a long-hidden love for Gray. When she can't pay the rent on the home she and Grady were to have lived in together, Sam and Dennis invite Gray to move into Grady's old room and stay as long as she likes.

Gray is unpleasantly surprised to discover that she is not the only houseguest. Fritz (Timothy Olyphant) is a friend of Grady's from L.A., and Gray has seen just enough of him to have him pegged as a sleazy lothario. But when Gray begins to uncover unsettling information about Grady's past, Fritz turns out to be an important source of information. He also turns out to be a different sort of man than she thought he was.

For the most part, it's not too hard to figure out where Catch and Release is going, but getting there is a frequently pleasant trip. With Julia Roberts off having babies and Meg Ryan seemingly in romcom retirement, Garner steps into the void with all the adorable pathos and endearing vulnerability we could ask for. Timothy Olyphant (TV's Deadwood) comes on strong as the roguish Fritz, flashing sly grins to rival Dennis Quaid's and even revealing some rather heart-rending self-loathing early in the film. The chemistry between Garner and Olyphant produces sparks almost dazzling enough to blind us to the improbability—even the unseemliness—of a romance so soon after Grady's death.

Smith's smart but lazy Sam is a familiar character, but Smith makes him both funnier and more nuanced than the stereotype warrants. The sequence in which he awkwardly receives a massage from Juliette Lewis' flaky New Age therapist is worth the price of admission. In fact, Smith steals almost all of the movie, misfiring only once in an unfortunately "serious" hospital scene in which we can feel him acting. 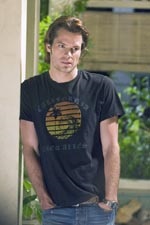 Catch and Release was written and directed by Susannah Grant, an Oscar-nominated writer who crafted the screenplays for Erin Brockovich, In Her Shoes, and Charlotte's Web. If there are enough great moments in the movie to assure us that Grant hasn't lost her writerly touch, there are also enough clumsy ones to remind us that this is her directorial debut. Grant has revealed that the first cut of the movie was almost 3 hours long. Clearly it needed to be edited—even at 115 minutes it feels a tad lengthy—but it's hard not to wonder if some of the wrong moments were left on the cutting room floor.

Characters evolve too quickly—sometimes off camera—for us to keep up. The film relies too heavily on awkward coincidences (why does everyone keep running into each other in this film?) and, toward the end, forces tidy resolutions onto messy story lines. There are several false endings, robbing the final acts of their emotional payoff. And, like so many other Hollywood films, physical intimacy is used as shorthand for emotional intimacy, over-simplifying relationships and complicating ethics. Perhaps this is an accurate reflection of the way sex is used in many real-world relationships, but it would be nice to see a portrayal of love developed another way.

Nonetheless, Catch and Release has at least two laugh-out-loud moments, one decent plot surprise, and a romance that mostly makes up for its questionable timing with the winsomeness of its participants. It insists on an optimism about people—their ability to grow and change, and to bear a certain nobility even when deeply flawed—that is kind of refreshing. Even if it doesn't always make sense, it leaves you feeling pretty good.

Catch and Release is rated PG-13 for sexual content, language and some drug use. Sex is implied in several scenes and somewhat explicit in two. A character puts an unlit joint in his mouth in one scene, another character overdoses on prescription medication, and there is repeated abuse of alcohol. The movie is definitely unsuitable for children and caution is recommended with teens.

Catch and Release stars Jennifer Garner as a woman who discovers that her recently-deceased fiancé was keeping some pretty big secrets from her—so she rebounds by sleeping with one of his promiscuous best friends while hanging out with a couple of his other buddies. The ensuing "romantic comedy" is neither very romantic nor very comic (apart from Kevin Smith's supporting role as one of the buddies); perhaps "romantic dramedy" would be a better word?

Carolyn Arends (Christianity Today Movies) likes the performances but finds the movie a mixed bag, partly due to the fact that director Susannah Grant, the Oscar-nominated writer of Erin Brockovich and In Her Shoes, is still finding her feet as a director (this is her first movie behind the camera). Arends writes: "There are several false endings, robbing the final acts of their emotional payoff. And, like so many other Hollywood films, physical intimacy is used as shorthand for emotional intimacy, over-simplifying relationships and complicating ethics. Perhaps this is an accurate reflection of the way sex is used in many real-world relationships, but it would be nice to see a portrayal of love developed another way."

Bob Hoose (Plugged In) looks back to an earlier era, in which movies showed how people overcame problems by developing strength of character, and then contrasts that with this film, in which people sleep around and nobody really minds because, well, nobody wants to judge. "That narrow, narcissistic point of view," he writes, "is what tends to muddy up Ms. Grant's inconspicuous little movie that tries to be about love and loss and love again. … [O]n The O.C. it would make perfect sense to happily and gratefully bounce from a cheating guy to a promiscuous one. But in real life, all Gray would be asking for is more pain."

Mike Smith (Past the Popcorn) finds the film's idyllic, hippie-ish acceptance of promiscuity superficial and unbelievable: "The director does almost nothing to help us understand the relationships that develop. Motivation is non-existent. Moods never seem to change. Grief is muted, joy is muted, life goes on and doesn't change a thing. And soul-searching never enters this film's lexicon. The dialogue doesn't address the philosophical issues the film raises—it blithely assumes the answers are obvious: What the heck; we all live in a moral cocoon of anticlimax and communal openness. You may be an ogre and a liar. But you look pretty cute, and I need someone right now. I guess you'll do."

Christa Banister (Crosswalk) says Garner's smile, "which she flashes constantly," can't "make up for the film's weak script," or for the implausibility of her character falling in love again so soon after her fiancé's death: "In what could've been an insightful commentary on the grieving process, the writers wasted an opportunity by creating unbelievable characters in a by-the-numbers comedy that's devoid of any substance."

Mainstream critics, having caught the film, have thrown it back in the water.