Seraphim Falls, a Western about a man seeking revenge against a Civil War adversary long after the war's over, begins with a bang. Well, it actually starts with a very calm, beautiful, and lonely shot of a man named Gideon (Pierce Brosnan) cooking a small animal over an open fire in the snowy mountains of 1868 New Mexico. He moves slowly and seems comfortable in this natural and scenic setting.

And then comes the bang. Literally. Without warning, a bullet pierces his left arm. He jumps out of harm's way and falls down a steep snowy slope. Calmly and deliberately, a group of five armed men pursue him through the forest and over a waterfall.

When he's built somewhat of a lead, Gideon struggles to start a fire with one good arm and hands shaking from the bitter cold. And then, he performs painful self-surgery to remove the bullet. But his chasers—led by Carver (Liam Neeson) aren't far behind. And so, he keeps running. And the hunters keep chasing.

It's an energy-charged beginning with real suspense, great pacing, and an aggressive run-or-die tone. And it is unquestionably classic Western. It's sparse and gritty. There's little dialogue (and when there is, characters use Western-only phrases like "He done kilt them" and "thanks for that there stew of yorn"). The action occurs on an amazing landscape that reminds the audience of how small the characters are in the grand West. The theme is classic Western territory—revenge and self-administered justice.

And like many old Westerns of the 1950s and '60s, the plot points come naturally and slowly. We don't know who Gideon is. Or why he's being chased. Or even if he's the good guy or bad guy. Instead, we are seeing only the action. Someone is after him and he must run and ... 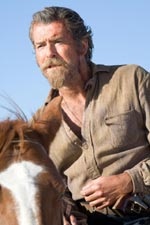