Or something. And God is in all of us, and he doesn't judge. Such is the wobbly theology of Sinead O'Connor, whose new album is being pitched to the Christian market.
Andree Farias|July 9, 2007

Most people remember Sinéad O'Connor one of two ways: as that angelic, lovelorn figure in the video of her smash "Nothing Compares 2 U," or for tearing up a picture of the pope on Saturday Night Live. Her 20-year career has been marked with pop stardom and accolades, but also with controversy and misunderstanding. Even as she takes the stage at Joe's Pub in New York, one can sense the polarity. The venue only seats 150, enough to house a handful of fans and some of the biggest papers in town. But O'Connor, 40, isn't there to impress anyone. Her priority is her new album Theology (Koch), a two-disc set inspired by the Old Testament—and a project that is, interestingly, being pitched to the Christian market by publicists (one of whom arranged this interview). At the show, O'Connor plays none of her hits; it's just her and another guitarist, performing Theology in its entirety. In a flowing red dress, O'Connor looks almost motherly—serene, radiant, self-assured. Her voice is still powerful, and, combined with the ancient text, it's nearly prophetic. But just as the audience begins to heed her admonition, O'Connor, between songs, makes a crude joke about the female anatomy. By show's end and a few f-bombs later, we're all convinced: old Sinéad hasn't gone anywhere.

Sinéad O'Connor I was born in 1966 in Ireland, which was at the time a Catholic theocracy, which can sometimes have negative connotations. My family were all strict Catholics—not in a ram-it-down-your-throat way, but in a kind, loving way. So it was a very Catholic upbringing, went to Catholic schools, an extremely religious ... 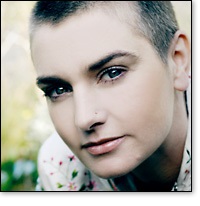