I cannot begin to describe to you how much I loathed Transformers, but I shall attempt to find the words.

But first a confession. I hate Michael Bay's films (Bad Boys, Armageddon, Pearl Harbor, The Island). Still, I badly wanted to like Transformers. I hoped against hope that it would be good. I made a concerted effort to wipe away all vestiges of my knee-jerk repugnance to Bay's oeuvre. After all, I thought, the usual reasons I detest Bay's films—they're big and loud, with skimpy plots, showy car chases, massive explosions, testosterone-fueled action, etc.—might actually be just the things Transformers requires.

Yes, I am one of those 30-somethings who grew up playing with the original Hasbro toys. And yes, I used to love to watch the fantastic animated TV series in the '80s. While the animation certainly doesn't hold up 20 years later, Transformers' spirit is unchanged. They were cool then and they're cool now. All to say, I came to this film as a legit fan.

Bay and his team go to great lengths (and time) to make Transformers a human story first. The everyman at the center of this story is Sam Witwicky (Shia LaBeouf), an average 11th-grader eyeing his first car and using it to impress girls. What Sam doesn't know is that there is much more than meets the eye about the beat-up old Camaro he drives off the used car lot. Sam doesn't realize how right he is when he comments that the car seems to have a mind of its own. In fact, it does. The car is actually the Autobot Bumblebee, a vanguard sent to protect the young man who unwittingly holds the secret (within a conceit far too ridiculous and silly to even try to explain here) to an eons-old galactic civil war—the AllSpark cube, a monolith of extraordinary ... 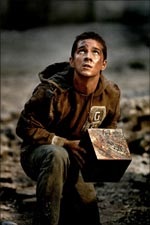