Ridley Scott's crime drama American Gangster hinges on two men who are the exception rather than the rule when it comes to their respective occupations.

When New Jersey police officer Richie Roberts (Russell Crowe) finds $1 million in unmarked bills, he turns it in. It's the right thing, sure, but an act that marks him as a threat among the dirty cops around him. He and his partner become pariahs for doing their job while other cops sell confiscated dope out of the evidence room to make side careers. Roberts is a cop clearly in opposition to the film's average officer.

Frank Lucas (Denzel Washington), a Harlem drug syndicate heir, changes the way street dealers do business: he cuts out the middleman. Seeing the new convenience-store, fast-food culture of the late 1960s, he refuses to merely sell drugs for the Italian mob and instead buys pure, uncut heroin direct from Vietnam. Lucas becomes the Wal-Mart of Heroin. He buys low and passes the savings to the customer. Of course, New York mob kingpins aren't so happy with this spirit of innovation. Lucas is a gangster clearly in opposition to the film's average dealer.

The Lucas-Roberts parallel is cemented in the end when Lucas tells Roberts that "your kind" (i.e., dirty cops) helped his rise to power. "They aren't my kind," Roberts sneers. "If they're in business with you, they aren't my kind. Just like Italians aren't yours."

In many ways, Lucas and Roberts are similar: driven, innovative, dedicated, and relentless. If they were on the same side, you can imagine them being dangerous and as thick as thieves (or cops). Instead, they are the opposite pillars that Scott uses to build American Gangster's epic retelling of a true story. It's the classic crime movie structure: a powerful ... 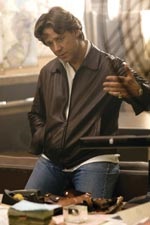