Say what you like about Paul Haggis's merits as a writer or director, but he sure does know how to bring together an impressive cast and, in some cases, how to elicit some of their finest work. In the Valley of Elah has generated a lot of buzz for Tommy Lee Jones, who plays the father of an American soldier who goes missing, and then turns up dead, after a tour of duty in Iraq. But while Jones clearly earns all his accolades, you cannot help but notice all the other actors who turn up for small-ish parts here and there: Susan Sarandon as Jones's wife, Josh Brolin as a sleazy police chief, even James Franco in a couple scenes as an army sergeant who answers the phones. (Did he have other scenes that ended up on the cutting-room floor?)

So, credit where credit is due. As Hank and Joan Deerfield, Jones and Sarandon do a masterful job of conveying the grief of two parents who have lost their child and don't know why he died. Actually, it's worse than that: we find out fairly early on that they have lost two children, because they had another son who died in an accident on an army base some years before. And beneath the grief, there is resentment, as Joan accuses her husband, a Vietnam vet, of inspiring her children to join the military and thereby put themselves in harm's way. But the bitter, ironic truth is that, while both of their sons died on Uncle Sam's payroll, neither of them was killed on the battlefield. They died when they should have been safe.

Their second son met a particularly gruesome fate—stabbed, dismembered, burned, and the pieces of his body left in a field to be pecked at by animals—so Hank sets out to find out who killed his boy. But everywhere he looks, there is bureaucratic wrangling and callous ...

Join in on Facebook
Tags:
None
Posted:
September 14, 2007
More From:
Peter T. Chattaway 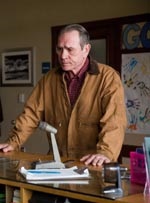