First there was the Summer of the Three-quel (Spider-Man 3, Pirates of the Caribbean: At World's End, Shrek the Third, Ocean's 13, Bourne). Now we seem to be in the Autumn of Jane Austen. Last month brought us Becoming Jane, and now we have The Jane Austen Book Club. Perhaps next month Austen will strike back or take on the Bronte sisters in a boxing match.

This installment in the Autumn of Austen takes an intriguing look at the six novels that earned the British writer screen time nearly 200 years after her death. The movie is set in a modern-day book club that meets once a month to discuss each of Jane's beloved novels: Pride and Prejudice, Sense and Sensibility, Emma, Mansfield Park, Persuasion, and Northanger Abbey. We get some of the dialogue about characters, plot, and Austen's well-known irony. But if you aren't familiar with all or even any of Austen's works, you won't be lost since most of the film centers on the six unlikely people who comprise these literary gatherings.

First there's Jocelyn (Maria Bello), a never-married 40-something dog breeder. Sylvia (Amy Brenneman), her childhood friend, is in the midst of a divorce. Their 50-something single friend Bernadette (Kathy Baker) has been married six times and serves as a combination of earth mother and den mother. These three drag Sylvia's 20-something lesbian daughter, Allegra (Maggie Grace), into the group, mainly as moral support for her mom. Bernadette invites high school French teacher Prudie (Emily Blunt) when she finds her crying over her strained marriage at an Austen fest. And Jocelyn ropes in the lone guy, Grigg (Hugh Dancy), whom she meets when her dog-breeding convention is held at the same hotel as his science fiction seminar.

Join in on Facebook
Tags:
None
Posted:
September 14, 2007
More From:
Camerin Courtney 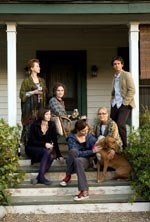