Five years ago, if anyone had predicted that Limp Bizkit frontman Fred Durst would become a film director, and that one of his first movies would star gangsta rapper Ice Cube, they probably never would have guessed that the resulting film would be a family-friendly, uplifting, PG-rated, semi-true story about a girl from a broken home who makes history after she joins an otherwise all-male middle-school football team. But with The Longshots, that is, indeed, the movie that these men have made. 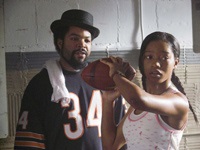 The film is based on the story of 11-year-old Jasmine Plummer (played by 14-year-old Keke Palmer of Akeelah and the Bee), who, as a member of the Harvey Colts from Harvey, Illinois (a Chicago suburb), became the first female quarterback to play in the Pop Warner national football tournament in 2003. But like a lot of "inspirational" movies, The Longshots changes many of the facts in order to be more, well, movie-ish. The result is a very conventional film that doesn't particularly stand out from all the others of its ilk—but it is competently made and enjoyable enough on its own terms.

The tweaking begins with the unnecessary re-naming of Jasmine's hometown. For some reason, even though a photo of the real Jasmine in her Harvey Colts uniform is shown during the closing credits, and even though both Jasmine and the actress playing her were born in Harvey, the movie version of Jasmine is situated in a place called Minden and plays for the Minden Browns. I can't recall if the movie ever clarifies which state Minden is in, but there is a scene during the final tournament in which an announcer wonders aloud where the Minden team has come from, and the film cuts to another scene before anyone can answer him. So Jasmine's home has now become a sort of obscure little Everytown that everyone can relate to.

The movie also seems eager to capitalize on the recent wave of movies that have focused on the role that sports played in bringing equality and a sense of purpose to people dealing with the social injustices and economic malaise of the 1960s and 1970s. And so, despite the fact that it takes place in the 21st century, The Longshots borrows some of its story elements and much of its production design from those other, more retro films. It's there in the movie's autumnal colour palette; it's there in the fashions and haircuts; it's there in the cassettes and clunky old TV sets—complete with separate dials for VHF and UHF, instead of more contemporary electronic devices. If it weren't for the occasional references to Tyra Banks, Beyoncé Knowles and so on, you could easily assume this film was taking place decades ago, and not more or less today.

And finally, there is the story of Jasmine's rise to prominence itself. In real life, she was active in sports from a very young age, joining Pop Warner's Mighty Mites division when she was 6, and getting involved in wrestling one year later. In the film, however, she is a bookish recluse with no friends who wants to be a model some day, until her uncle Curtis Plummer (Ice Cube; in real life, her uncle is named Fred Johnson) asks her to pass him a football that landed near her, and something about the way she throws it convinces him that she has a natural talent for sports.

Curtis has a talk with Jasmine before a game

And so begins the usual Hollywood storyline, in which someone who had no obvious knack for sports a few weeks ago is turned almost overnight into a star athlete, winning the confidence of teammates and overcoming prejudicial barriers based, in this case, on her gender. To make these narrative shortcuts work, the film, written by Nick Santora (Law and Order) and Doug Atchison (Akeelah and the Bee), has to convince us the Minden Browns are a bunch of losers who "play like girls" anyway, so it doesn't seem so odd when their coach shrugs and decides to let Jasmine join the team. But then, after Jasmine has proved her worth on the football field, the film has to show the team succeeding, and the coach giving them inspirational pep talks in which he tells them how proud he is of them. Such changes are not impossible, but as handled here, they feel a bit arbitrary.

The story off the field is pretty by-the-numbers, too. Uncle Curtis, a former high school football star himself, has been in a funk ever since he lost his job, and he spends most of his time drinking. But when his sister-in-law, Jasmine's mother Claire (Tasha Smith), asks him to look after his niece, he reluctantly agrees to do so—though he's still ill-mannered enough to drink his booze out of a paper bag outside the school, and he doesn't quite have what it takes to prepare some food for his niece once he has walked her home. Once he discovers Jasmine's talent with a football, however, he naturally begins to get his act together so that he can help her to nurture this talent, first privately and then as one of her coaches.

Both Jasmine and Curtis get a boost from the local church, which is also depicted in fairly conventional terms. When Reverend Pratt (Garrett Morris) is in the pulpit, he delivers inspirational messages about looking at what you do have rather than what you don't have, and when he's not in the pulpit, he uses slightly earthier language to motivate the residents of Minden into making their community a better place. There is little here about faith, per se; the church is valued more for the social role it plays than for anything else. But the church is depicted as a positive force in the life of both Minden and its football team, and that is arguably better than nothing.

For all its predictability, The Longshots still "works" as a story about a girl who copes with her various insecurities thanks to the help of others. Jasmine is still obviously hurt by the fact that she and her mother were abandoned by her father a few years earlier, and there is a genuine tenderness to the scenes where Jasmine and Curtis discuss her father's absence from their lives.

Thankfully, for all the emphasis the characters place on winning the big games, The Longshots is, in the end, more interested in personal relationships and in how sports can build a person's character. Those are fine lessons in a film aimed at young audiences, even if they are not very original, and even if the film is not quite as true to life as one might have wanted it to be.

The Longshots is rated PG for some thematic elements (a father left his family a few years ago, a man is briefly seen drinking out of a paper bag outside a school), mild language (a couple "damns," an "ass," a couple of characters say words like "God" and "Jesus" when they are surprised by good news that they intend to bring to church) and brief rude humor (boys on the field joke about knocking Jasmine out of her training bra, one boy objects to her being the quarterback because he doesn't want her hands under his crotch, another boy is hit in the groin by a football). The film also shows the church playing a positive role in the life of the community.

1 of 4
Ice Cube as Curtis Plummer, Keke Palmer as Jasmine PlummerJasmine with her mother Claire (Tasha Smith)Curtis has a talk with Jasmine before a gameDirector Fred Durst with Ice Cube