Earlier this summer, we were all treated to Indiana Jones and the Kingdom of the Crystal Skull, a cinematic event many of us were deeply excited about, only to be greatly disappointed; the film was a pale, ridiculous ghost of its former self, more hokey parody than joyous reunion. After 15 years, it would have been better if we'd simply left Indy riding off into that glorious sunset. And so I'm forced to ask: Why, when that film was such a colossal disappointment, would I ever want to watch your third-rate, wannabe, copycat rip-off!? Mr. Cohen, I'll say this for The Mummy: Tomb of the Dragon Emperor—it makes Indy's latest adventure look like a masterpiece by comparison. 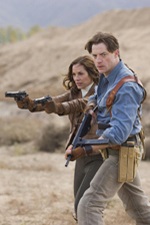 Brendan Fraser and Maria Bello as Rick and Evelyn O'Connell

In your film, Brendan Fraser reprises his role as Rick O'Connell, the globe-trotting explorer who, seven years after last Mummy installment, now finds himself living in an opulent Oxfordshire mansion, whittling away his hours fly-fishing—or at least attempting to. His wife, Evelyn (played by American actress Maria Bello, who does a commendable job with the English accent but seems to be channeling Kate Beckinsale more than Rachel Weisz), has made a fortune writing not-so-fictional novels about perilous run-ins with nasty, undead fiends. Young Alex, who was only a child in the last film (now played by Luke Ford, who looks no more than 10 years Fraser's junior), is all grown up and, unbeknownst to his parents, has quit university to go dig for a mythical tomb in the desolate Chinese outback. Like father, like son, eh? So clever, Mr. Cohen.

The tomb belongs to Emperor Han (Jet Li), a tyrannical leader who ruled all of China with a barbarous fist until a beautiful sorceress (Michelle Yeoh) put a curse on him, turning him and his 10,000-strong army into stone. But malevolent forces intent on raising the emperor back to life so he can once again rule the world are closing in on Alex. When things get out of hand, it's a good thing Alex can call on his parents and bumbling Uncle Jonathan (John Hannah) to save the day. 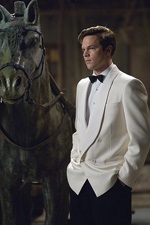 As a resurrected Han (and he ain't no Solo) seeks to raise his undead legion, our heroes must battle him from the bustling, neon-bathed streets of Shanghai to the frigid wasteland of the Himalayas to the portals of the fabled Shangri-La. As Han's supernatural powers grow ever stronger, the O'Connells realize that the only way they are going to take him down is to call on some mummies of their own.

Does that about sum it up? Not exactly Shakespeare is it, but then it was never meant to be. Still, for a film crafted as an Indiana Jones knock-off, it falls a wee bit short, don't you think? This is the sort of film Steven Spielberg used to do, and do so much better. We've seen it all—and I mean all—before haven't we? Between the archeological adventures, spying for the Allies during World War II, sword fights, and father and son infighting, I thought I was watching the latest Indy all over again! What didn't come from Crystal Skull seems cobbled together from Indiana Jones and the Temple of Doom—Shanghai nightclubs, airplanes crashing into snowy mountains, and people hanging on for dear life from rope bridges. 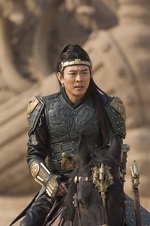 Jet Li as the vicious Han (but he's no Solo)

Hammy is one thing. Dim-witted is another … Excuse me? You want an example? Sure. How about Yeti snow monsters who, after punting a bad guy over a Himalayan archway, triumphantly raise their arms like NFL referees signaling a successful field goal? Is this The Mummy? Or The Dummy?

Where did you find screenwriters Alfred Gough and Miles Millar? That's a rhetorical question underscoring my frustration, by the way. I know you found them penning scripts for TV's Smallville. You may want to send them back. In case you missed it, this film contains such nuggets sure to send shivers up the spines of the Writers Guild of America, as, "The yak yakked," "I hate mummies—they never play fair," "You guys are like mummy magnets," and "There's something incredibly romantic about vanquishing the undead." It's bad enough that these infantile lines made it into the final script, but did you have to give nearly all of them to poor comic-relief man John Hannah? After all, you're practically his only good paycheck these days!

Fraser tries to give some tips to director Rob Cohen, who apparently wasn't listening

But, Mr. Cohen, here's the good news: There is someone in Hollywood whose work frustrates me more than yours, and that's your star, Brendan Fraser. Either he has the worst agent on the planet, or he has a terrific agent that he rarely listens to. For every Gods and Monsters, The Quiet American and Crash, there are the George of the Jungle, Monkeybone, Bedazzled and yes, Mummy films to undo all the good he's done.

I couldn't help but notice that film concludes with a titanic clash of undead armies (and that's no spoiler, since you included the scene in all your trailers). Yet with all those modern computers, your special effects lacked the buoyant wonder that old-timers like Ray Harryhausen used to manage by hand. And it seemed like you injected a certain silliness into the skeletal mêlée that reminded me of Sam Raimi's deliciously corny Army of Darkness—only not so funny. (And FYI, Raimi is reteaming with his good luck charm, Bruce Campbell, for another hammy Evil Dead film. I'm sure, if you asked politely, he'd be willing to show you how it's done.)

But you know, maybe this isn't all your fault. Blame it on Batman. After the credits began to roll, a critic next to me said that after The Dark Knight, nothing he sees is good anymore. The Dark Knight was certainly the high watermark of the summer. But don't take it too hard. Your film is exactly the sort of ridiculous, vacuous, throwaway fare we've come to expect during the summer season.

Perhaps there's a lesson hidden in here, Mr. Cohen. Sometimes it's best to just leave things buried. And if they try to rise up and walk among us, somebody needs put them back in the ground where they belong.

The Mummy is rated PG-13 for adventure action and violence. There's a lot of violence, though most of it is of the cartoon variety. Still, there are a few scenes—decomposed bodies, exploding mummies, frightening monsters—that are unsuitable for young kids. While there is no sex or overtly foul language, there are a few choice entendres and a colorful metaphor here and there.

1 of 4
Brendan Fraser and Maria Bello as Rick and Evelyn O'ConnellLuke Ford as Alex O'ConnellJet Li as the vicious Han (but he's no Solo)Fraser tries to give some tips to director Rob Cohen, who apparently wasn't listening