The personal transformation of the complex and profoundly imperfect man in Schindler's List might very easily be our own story.
Marc LiVecche|December 30, 2008

Editor's note: The following article originally appeared in a recent issue of Comment magazine, the opinion journal of CARDUS, and we'd like to share it with our readers due to a number of Holocaust movies now playing—including Valkyrie, The Reader, The Boy in the Striped Pajamas, and, opening Friday, Defiance and Good.

This year marks the 15th anniversary of the release of Schindler's List, the Steven Spielberg film about the efforts of the Sudeten German Oskar Schindler to save eleven-hundred Jews from Nazi extermination. The film has never been without controversy. 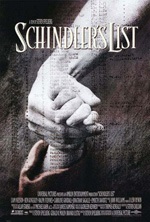 The very effort of portraying the Holocaust in feature films has long been a source of debate and censure. There are those who insist that the Holocaust is inscrutable, not available to portrayal in film or literature. One of the more enduring criticisms of Schindler's List is that by depicting a rescuer the film distorts the real horror of the Holocaust.

Ilan Avisar's critique is typical: "the message implied in [Schindler's List] is one that focuses on exhilarating qualities of courage and moral strength at the expense of an excruciating recognition of the genocidal evil that prevailed." If one is to portray the Holocaust in film, say the critics, the portrayal must mirror the reality of the event itself: most Jews died and most Germans killed them, collaborated with the killers, or stood idly by.

Both criticisms of Holocaust film more broadly and of the genre of the rescue film specifically should bother me, as a scholar of the Holocaust, as a student of theology and ethics, as a sometime artist, as a movie-goer, and as a Christian. Of the first charge I'll say little except that as a human event the Holocaust must be subject to human apprehension. This isn't to downplay the profound mystery of evil or to pretend it isn't a thorn in the flesh of reason. But it is to say that we have both the ability and the obligation to move toward greater and deeper clarity. Regarding the second charge, I'll say more.

First, I confess confusion. I have led several seminar discussions on Schindler's List and I have seen the film perhaps a dozen times. I have not seen recognition of the Holocaust's evil sacrificed to any other consideration. Holocaust scholar Lawrence Baron counts twenty-one scenes of atrocities inflicted on Jews by the Germans—one massacre lasting for over twenty minutes. Increasing the revulsion of the slaughter, the camera most often lingers over the most vulnerable victims—children, women, and the elderly. Schindler's exploits are consistently set within a broader context that drives home the fact that while Schindler's Jews and their descendants number over six thousand, it was over six million who were lost. If our viewing the film overturns the charge that Schindler's List diminishes the horror of the Holocaust, what else might give impetus to the claim?

Here I am reminded of the Russian poet Joseph Brodsky's suggestion, "Western man, by and large, is the most natural man, and he cherishes his mental comfort. It is almost impossible for him to admit disturbing evidence." Brodsky was commenting on the disbelief which greeted Aleksandr Solzhenitsyn's revelations about the Soviet gulag. Brodsky's concern was over the predilection toward sentimentality that makes us tend to deny the scope of evil in the world. Here, however, I want to appropriate Brodsky's observation in a different way.

Denis Haack has previously written in Comment that there are two ways to avoid reality: sentimentalism and cynicism. The resistance to Schindler's List is, I fear, a result of the cynical view that wants to downplay goodness. One critic insists that rescue in the context of the Holocaust was so rare as to be untrue in that it did not reflect the majority response. To emphasize rescue in any way is to overshadow evil. 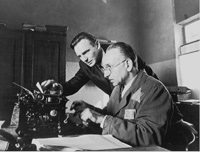 Similar thinking is prevalent across Holocaust scholarship. There is something tragically wrong in that most of us know the names of Eichmann, Himmler, Heydrich, and Hitler, but few of us could name a handful of rescuers. Some argue that there was no altruism, that rescue occurred for selfish gain or to satisfy the egotistic gratifications of the rescuer. The a priori assumption is that human beings are basically ignoble, wolfish, and thoroughly corrupt—scratch a saint and find a sinner. But I think Brodsky's observation suggests a deeper issue.

What would I have done?

Goodness challenges us in a way that evil can never do. I feel reasonably confident that in the eyes of my neighbors I stand up well against an Eichmann. But how do I measure up against a Schindler or a Trocme or a Kolbe? Or, how do I look in the eyes of an infinite and benevolent God? Against Nazi evil I look at what the righteous did and I can't help wonder what I might have done. When courage was asked of me, would I have been found adequate or wanting? Goodness provokes in another way. It intrudes on my cynicism and encourages me to hope. But hope is such a terrifying thing, carrying with it the possibility of disappoint and sorrow. It depends on where we place our hope—will hope deliver? Reasonable hope carries with it the burdens and responsibilities of discernment and judgment.

Jaundiced cynicism can be more mentally comforting than looking at the full scope of reality. The zeal with which Paul exhorts us to abhor evil and to cling to goodness demands much. The word "cling" is only used elsewhere in the Bible to describe the full knowledge of sexual intimacy. Do we pursue goodness in the world—even in the world of Auschwitz—with such a hunger? It is not enough to insist that there were too few Schindlers to warrant comment. The notion that rescue was so rare as to be untrue is vulgar. If it happened, it is not untrue. The frequency of occurrence matters little. Sodom was in need of only ten good men.

Holocaust feature films are powerful because film is story, and good stories tend to be about individuals at odds with the world around them. The personal transformation of the complex and profoundly imperfect man in Schindler's List might very easily be our own story. We are all of us ruined palaces and glorious ruins. The Christian responsibility to the reality of this is all encompassing. We have a double obligation: to remember the nearly indescribable evil that humankind has wrought and the precious good. We must not be deceived about the worst. But we must not be blind to the best.

Marc LiVecche is a Ph.D. student in religious ethics at the University of Chicago Divinity School. He has led educational travel trips through Central Europe and to the former Nazi concentration camp at Auschwitz, exploring the history and theological implications of the Holocaust and evil more generally.

This article originally appeared in Comment magazine, the opinion journal of CARDUS: www.cardus.ca/comment