Playing a compassionate caretaker in The Curious Case of Benjamin Button, Taraji P. Henson says her character is the embodiment of God's unconditional love.
Rebecca Cusey|December 22, 2008

Taraji P. Henson has a long resume of TV and movie gigs, the most visible of which is Shug in Hustle and Flow and as Pam in Tyler Perry's The Family That Preys. But her breakthrough role might just be her upcoming turn in the epic drama The Curious Case of Benjamin Button, to be released Christmas Day.

Henson plays Queenie, a compassionate woman who takes in an abandoned, misshapen baby and chooses to love him when others turn away in horror. That baby turns out to be Benjamin Button (Brad Pitt), a child born as an old man who is aging backwards.  As caregiver of a large home for the elderly in New Orleans at the close of World War I, Queenie divides her time between shepherding her charges to their final journey and raising the castaway child. As an adult, Benjamin travels around the world and finds love—but his center, his home, is always with Queenie, his adopted mother.

A woman of faith, Queenie is best summed up by her line when she finds the child, who she believes will not live long, "He's still one of God's children," she says.

Henson, mother to a 14-year-old son and a former special education teacher, doesn't project the usual glossy Hollywood exterior. In a conversation with CT Movies, she is free and frank, talking with animation about her work, her father's death, and her view of life.

Queenie is one of the most life-affirming, positive characters we've seen onscreen for a long time. What drew you to this role?

Taraji P. Henson: That's what intrigued me most about Queenie, her ability to love unconditionally. I hope everyone has had the joy and the privilege to love in that way. When you love like that, race doesn't matter, disability, it all goes out the window. Because of that passion, that love, that throb, that heartbeat—that is the driving force.  She was able to see past color, she was able to see past his exterior. Queenie was used to taking in the unwanted.

I think she believes she was put on this earth to give every human, no matter what their circumstances, unconditional love. If she couldn't have her own kids, she could definitely give it to other people.

You lost your father recently, and you've said you experienced some healing through this film.

Henson: I just needed this film. Losing my dad, talk about not seeing something coming. I was in the height of [promoting] Hustle and Flow; I was in a photo shoot and I get a call, and they tell me they found a growth on his liver.

This character [Queenie] that deals with death, that's all she knows. I experienced my father dying in front of me, while I was in the room—I think something in him knew I was strong enough to handle it. I think in some ways it lined up that way because God was sending me this script [for Benjamin Button]. This project forced me to deal with my father's death. I couldn't run, I couldn't hide. I had to deal with it.

Talk about the circle of life. My dad was there to witness me take my first breath, and I was there to witness him take his last. I'm honored and I'm blessed. I think he accomplished a lot and instilled a lot in me, and because of that, I was able to bring Queenie to life.

Your character has such a deep compassion, unconditional love. She is also a character of faith. Do you see a connection?

Henson: Absolutely. I think she's driven by spirit. When she first sees Benjamin, she knows that baby ended up on her doorstep for a reason. She knew right away that it was her calling to raise that child. She couldn't have her own children, but instead of taking the low road in life—"God, why did this happen to me?"—she still was able to find her purpose. God's love is unconditional. He loves me at my ugliest moments. And Queenie is the embodiment of that, and that's what drove me to the character.

The movie has such a soft and warm treatment of race, especially with Queenie. Can you discuss that element?

Henson: I don't think race was something that any of us felt like we had to deal with [in this film]. If you know history, you know what was going on in America in the early 1900s. But love supersedes it. And I think that's what we were all interested in. I think that's what's so beautiful about Queenie. She finds the joy in even the darkest moments. 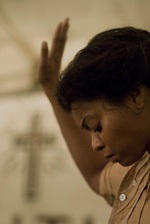 Queenie is a woman of faith and unconditional love.

That says a lot about life. I don't care whether you're going backwards or forward, life is not easy. There's no roadmap. You gotta figure it out as you go. But I think unwavering faith is what gets you through those dark moments. It's what got me. I moved out to LA with $700 in my pocket and a toddler and a whole lot of faith. So I'm a living testimony. Faith pays off.

You said what actors do is a spiritual process. Elaborate on that a bit.

Henson: You're allowing these characters to use your body as a vessel. And I say "spiritual" because we affect people through these characters. And the only way to really affect people is if you live that character's truth. Meaning when I play Queenie, Taraji has to disappear. I don't know if I have it in me to do some of the things that Queenie had to do. You really have to meditate and open yourself up and allow the character to speak to you. And you can't judge the characters. Because if I judge my character, then the audience will judge. They will have no place to empathize.

In the movie, there's so much about wisdom of older people. Is there somebody in your life that spoke wisdom to you?

Henson: Oh, so many people. My father was full of these little gems of advice and wisdom. Certainly my grandparents. So many people, people I meet on the street. Sometimes somebody I just pass in a restaurant. They'll say something and it will just stick. My 14-year-old son; I'm like, "Kid, have you been here before?" When 9/11 happened, he saved me from a nervous breakdown. You never know how the wisdom is going to come or how God is going to send it.

1 of 3
Taraji P. Henson as Queenie, holding the infant BenjaminQueenie celebrates Benjamin's first stepsQueenie is a woman of faith and unconditional love.