One important thing to know about the documentary Girls Rock! is that it's far more about girls than it is about rock—or even about its supposed focus, The Rock 'n' Roll Camp for Girls in Portland, Oregon. And that's not entirely a bad thing.

In 2005, the documentary Rock School examined a Philadelphia after-school rock program and the school's enigmatic founder. 2007's The Hip Hop Project showed the power of art to change lives by focusing on the creator of a New York rap initiative, its music, and the industry.

But Girls Rock!, like Oregon's Rock Camp itself, uses both the setting and the music only to probe the difficulties of being a girl in a culture that over-sexualizes them, weakens them into conformity and forces them to apologize for being themselves. The movie is not about the week-long summer camp or even rock music at all. It's about four girls who represent the trials most young girls face. And while the objective is noble and largely pays off, it's also frustrating at times.

Really, the movie doesn't tell you much at all about The Rock 'n' Roll Camp. For instance, it's even hard to tell if it's a day camp or a residential camp (the website verifies that it's a day camp.) Plus, we barely get any camp history. An animated and fun—but frustratingly limited—history segment implies that the women behind the camp were inspired by strong '90s indie rock chicks (including PJ Harvey, Riot Grrl, and Sonic Youth's Kim Gordon). They want to impart that empowerment and strength to "future heroines" damaged by a post-Britney pop culture that views female performers as mere sex tarts. Any more camp details are left out.

What is clear, however, is the camp's mission—and that's obviously the filmmakers' ... 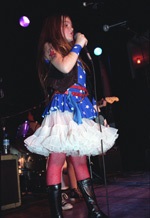